I have a theory. I think that man still has a basic need to hunt, but a 21st Century urban lifestyle doesn’t offer much by way of opportunity to smear oneself in pig’s blood and stalk beasts armed only with a bow and arrow and a copy of Whittingstall’s Meat bible.

So 21st Century urban man has developed an alternative. He heads down to Borough Market on a Saturday morning, his wallet flush with freshly-minted notes, and hands over Â£35 for a five-kilo chunk of organically-reared pork shoulder. There’s something truly liberating about handling a lump of meat this size, something to do with the fresh scent of blood in one’s nostrils, I expect. And while this transaction may not carry the full thrill of an all-night wild boar hunt through unfamiliar terrain, it does seem to satisfy some kind of primal longing.

And so I made Ring Cycle Pork. It’s not actually called that, of course – Whittingstall calls it the Pork Donnie Brasco – but it’s traditional for cooks to rename dishes if they’ve applied their own twist to the recipe. Mine was to burn it severely, but I figure that’s enough. And why Ring Cycle? Because the recipe calls for a twenty hour cooking period, the same time it takes to listen to Wagner’s authoritarian masterpiece of the same name. I could have called it the ‘Complete Works Of Bruce Springsteen Pork’, but that doesn’t roll off the toungue so smoothly.

So anyway. Here are before and after pictures of the meat, with a list of World events that actually did occur during oven-time. 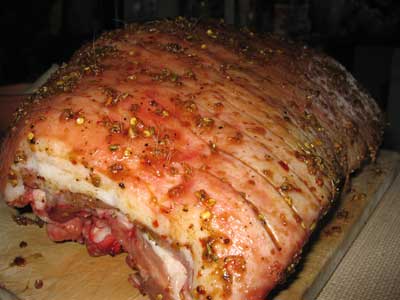 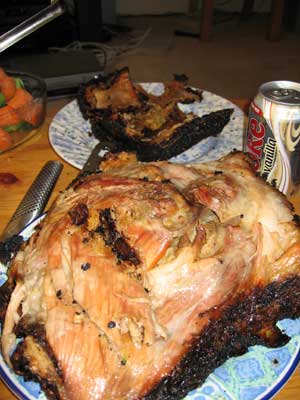 In other meat-related news this week, I visited a burger bar in London’s West End, and was a little nonplussed by the entire experience. So I wrote to the owners:

I walked past your premises yesterday lunch time and was drawn in by the delicious scent of freshly slaughtered beef. Salivating, I decided to order a burger, but the absence of any staff prevented me from doing so.

After a four or five minute wait, a flustered-looking grill-chef arrived, a bag of shopping in each hand. At any point during this period I could have leapt over the counter and taken a hammer to the till, or sneaked a bite out of one of the fine-looking hot dogs on display.

When the food finally arrived it was excellent, but I do worry about the security of your store. Any passing PETA representative could have created havoc yesterday given the opportunity that fell my way. You’re just lucky that I’m a law-abiding, meat-loving citizen, not some crazed, bean-munching nutcase.

Within seconds, a reply arrived. Here’s an excerpt:

We have been aware that some members of staff have not adopted the company character and are not always the ‘jolliest’ of fellows. We have had complaints from other customers regarding service but this is beyond belief. We are in the process of re-stucturing the management and staff at the burger bar, so rest assured that as soon as we can find a suitable replacement, we will sack the miserable incompetent little fucker.

Now that, ladies and gentlemen, is how to do customer care. No messing about. Brilliant.

← Scotch Ostrich Egg
i am unworthy of your readership →