Waking up with a thick head is beginning to become the norm, but there’s another day of sight-seeing in front of us, Mr Lee is already waiting in the hotel foyer, so the hangover is ignored and it’s straight on to the bus. The first stop on today’s whistle-stop tour of Pyongyang’s attractions is the USS Pueblo, an American ‘spy-ship’ captured by the North Koreans in1968. Our guide for the tour is one of the crew-members responsible for the hi-jack, who starts by showing a video relating the story of the incident. 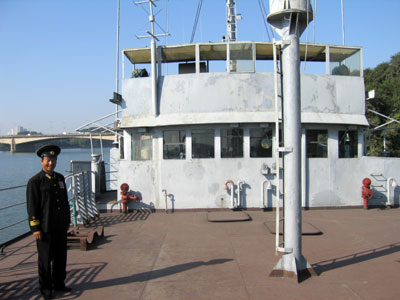 We learn how 82 American crew were held hostage for close to a year, only being released when the US published a full letter of apology. That the US retracted the apology the moment the sailors were freed is not mentioned. We roam the ship, from the communications room where various radio and encryption machines are stamped with plates that say things like ‘Top Secret Prohibited’, to the rear of the boat where a machine gun is primed to spray bullets across the bows of any ships from the US war maniacs or their southern puppet army. Etc. 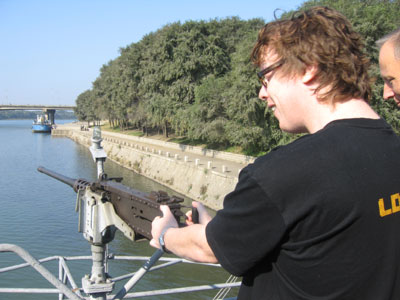 Did you spill my pint? 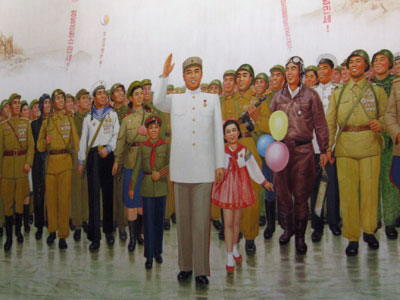 Every pair of eyes focused on the great leader. 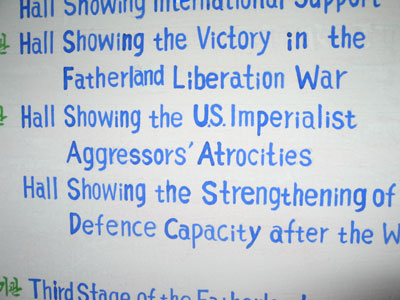 You don’t see that every day.

Despite the obvious enormity of museum, we’re given the usual brief highlights package – another film, a few rooms demonstrating American deceit, treachery and confession, and a spectacular, three-dimensional, 360° revolving diorama depicting various scenes from the conflict. 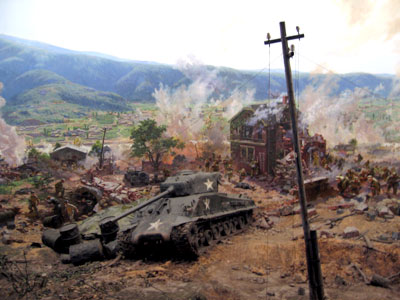 The tank in the foreground is real.

Naturally enough, the next stop is the museum shop, featuring shelves full of books and souvenirs to take home. I finally cave in, investing in a little holiday reading matter. 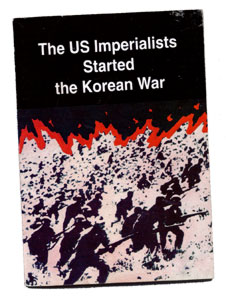 Just as soon as I finish the new Harry Potter…

Back on the bus, we’re taken to the Arch of Triumph, built in 1982 and (as we’re repeatedly told) three meters taller than its more famous Parisienne counterpart. The construction is dedicated to ‘the home return of the Great Leader Kim Il-sung who liberated Korea from Japanese colonialism’. To be honest, there’s not much that this fella didn’t do. 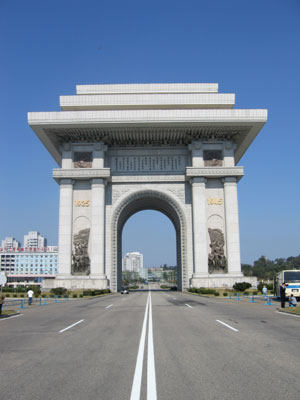 Taller than the one in Paris, honest.

Lunch is served at the non-revolving revolving restaurant atop Pyongyang’s TV tower, from where the three North Korean television stations are broadcast, each packed with shows proclaiming the superiority of the DPRK and the shameful behaviour of her foes. The view is glorious, and we’re handed binoculars with which to examine the city sprawled out below. 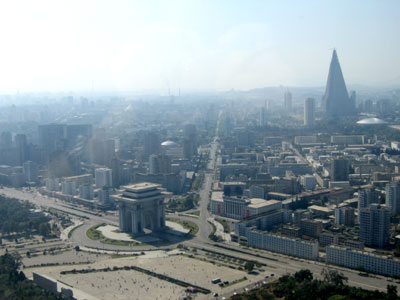 Pyongyang from above, featuring the Arch of Triumph (foreground) and the Ryugyong Hotel (top right).

For dessert we’re taken to see the Chollima statue, a 46-metre representation of a legendary winged Korean horse capable of riding 400km in a single night. The Chollima movement was inspired by China’s ‘Great Leap Forward’, as Kim Il-sung turned farmland over from individuals to cooperatives, encouraging collectivization and changing the way the entire nation worked. The rapid rate at which this change occurred was referred to as ‘Chollima speed’, and it’s an ethos that lives on today. Want to produce more tractor parts at your factory? Then work at Chollima speed. Not shredding enough cabbage to feed the family? Wielding that knife at Chollima speed is the answer. Obvious. 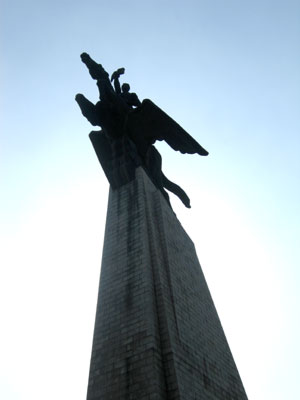 Even faster than Desert Orchid.

As tourists we’re less interested in this history than we are in the more recent propaganda posters next to the statue, and the usual scramble for photos results before Mr Lee quickly shepherds us back on the bus and on towards the next stop. 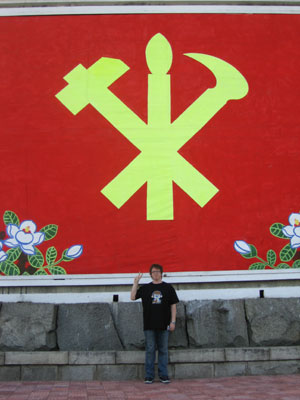 Have a proper gander at this.

The next stop, as it happens, is the Juche Tower, monument to the guiding philosophy behind North Korea, an ideology formulated by Kim Il-sung (who else?) emphasising self-sufficiency; in a nutshell, that the country can only rely on itself. Juche is such a part of the nation’s fabric that even the calender is affected – this year is locally known as Juche 94, year one marking the birth of Kim in 1912. 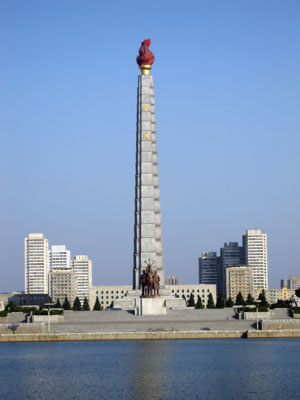 Pass the Juche on the left hand side.

At the foot of the statue is a chamber containing stone tablets donated by various DPRK sympathisers and Juche study groups across the globe, oddball organisations like The Ghana National Institute Of The Juche Idea, The United Nations Institute For Namibia Committee Of The Great Juche Idea Of Comrade Kim Il-sung, and the Juche Idea Study Group Of England, based in that hotbed of revolutionary activity, Winchester. We’re taken to the top of the tower via a corridor that smells of sewage and a lift that takes much longer than it ought to to climb the 150 metres to the summit, but the view is again spectacular, overlooking the river to Kim Il-sung square, scene of the previous evening’s marches. 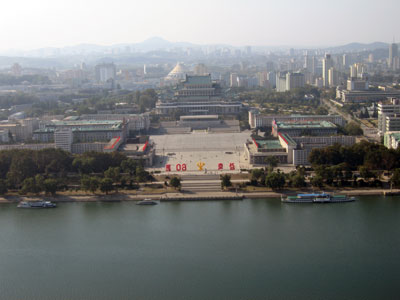 I can see your house from here.

A quick trip across town (by now we seem to be driving in circles) finds us at our next destination, The Monument to the Edification of the Worker’s Party. This splendid erection symbolises the three classes of people who make up the party: peasants (represented by the sickle), workers (a hammer) and intellectuals (a paintbrush). 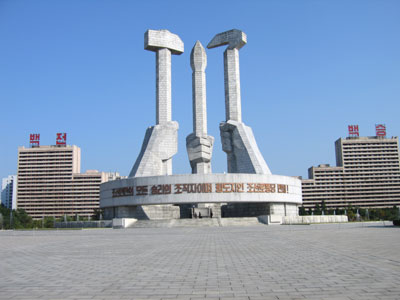 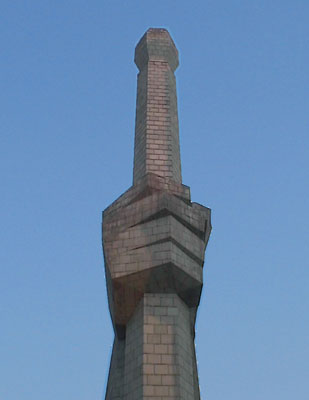 After a quick sojourn to the foreign language bookshop to procure some social-realist posters, we’re finally able to take take photographs of something that, for the more hot-blooded heterosexuals on the tour, has been a continued highlight. With Pyongyang suffering sporadic power outages, traffic lights are shut down during daylight hours, handing control to a team of uniformed girls who spin and whirl and twirl and direct the cars with near-military precision. We’re continually waving at the girls from the window of the bus, but most of the time they remain stern and tight-lipped, only a couple breaking rank and returning greetings. At one point Mr Lee asks what our fascination is with the ‘traffic ladies’. One can only imagine that the novelty wears off after thirty years or so. 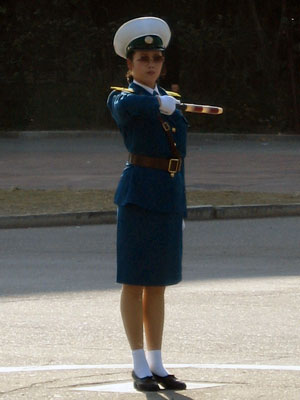 Our final moment of sightseeing is Kim Il-sung Square, 75,000 square metres of granite, where enormous paintings of Marx and Lenin sit side by side, opposite an equally huge portrait of Kim Il-sung adorning the facade of the Korean Central History Museum. 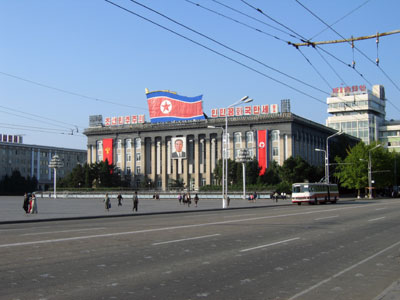 One of the more surreal moments of the tour occurs as I stroll across the square, the ridge of my left hand held against my forehead to shield my eyes from the sun. Striding towards me is a soldier from the DPRK army, his eyes showing confusion as he draws near. He stops, eyes me up and down uncertainly, and salutes. I guess it’s a natural reaction, my innocent gesture prompting his automatic reaction. I drop my hand, follow suit, and he moves on, both of us looking startled by this minor confrontation.

At one end of the square young Koreans are seizing a photo opportunity, clambering on board a rather forlorn, moth-eaten replica donkey. I’m wondering if the animal has any special significance, whether Kim Il-sung rode one during one of his tours of the nation, but in the end I think it’s just a donkey. Not everything here means something. 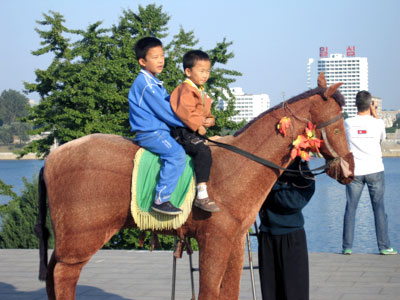 Tonight it’s a new hotel, the Yanggakdo. The place feels completely different to the rest of Pyongyang, probably because it sits on an island in the middle of the Taedong River, effectively isolating it from the rest of the city. It’s a bit anarchic after everything else we’ve seen – there’s a nine-hole golf course out front, a ten-pin bowling alley, rumours of a brothel in the basement, and an Egyptian-themed karaoke bar. CBS legend Dan Rather is stalking the corridors with his entourage, and has upset the locals by bringing his own food to eat. The locals, perhaps understandably, have reacted by refusing to talk to him. Once again, the view from my room is splendid.

It’s our last evening in North Korea, and as much as my head tells me that I need an early night, my heart insists on diving into the warren of corridors that run under the hotel to join the rest of the group for one last hurrah. It’s another karaoke bar, and while the number of English-language songs is extremely limited (Old MacDonald has a Farm, anyone?), the alcohol flows freely and the determination to go out with a bang sees everyone in high spirits. Even Mr Lee loosens up, lounging his way through a truly lascivious version of Rod Stewart’s ‘Sailing’, while I seize upon this once in a lifetime opportunity to roll out the falsetto and shriek my clumsy way through the Bee Gees’ ‘How Deep Is Your Love?’. By the end of the evening everyone is much the worse for wear, and before retiring we pose for photos, glasses raised and chanting “D! P! R! K! D! P! R! K!”

To be quite honest, it’s all a bit of a mess.