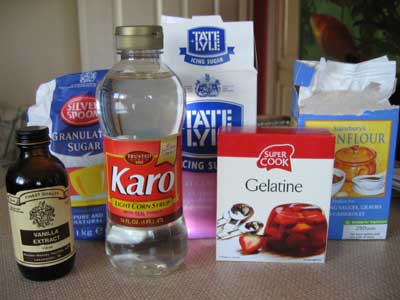 Can you tell what it is yet?

I had a rather splendid plan. I was going to make marshmallows, and share their spongy magnificence with you, my devoted reader. I’d tracked down a recipe and translated it into Queen’s English from the original American (cornstarch = cornflour, confectioners sugar = icing sugar). I’d done my research, discovering that while the marshmallow was a mid-nineteenth century invention, the sweet really only came into its own with the introduction of Alex Doumak’s patented extrusion process in 1948, a technique which helped popularise the now-familiar cylindrical shape.

I’d even found some corn syrup. This stuff is nasty, death in a bottle. The FBI probably look out for it as they test packages for Riacin. The high-fructose variety, when tested on some willing rats, caused anemia, high cholesterol and hypertrophy. In other words, their little hearts inflated until they popped. It’s been cited as a major possible cause of obesity amongst Americans who, in 2001, consumed a whopping great 62.6 pounds of the stuff. Each. It’s nigh-impossible to obtain in this country.

Luckily, I’d tracked down a rare example of ‘light’ corn syrup reaching UK shores on the shelves of the excellent Rosslyn Delicatessen in London’s posh Hampstead district. Rather less fortunately, I was perturbed to discover that the second largest ingredient in this healthy alternative is, in fact, high-fructose corn syrup. It’s like buying lo-fat milk to find that it contains added fat.

I even had a dry run. I combined the ingredients in the manner prescribed by the recipe and dusted off my ancient Molineux Masterchef 470 food processor or, as they probably say at the French Culinary Institute, my centrifugeuse et presse agrumes. I whizzed and whirred and churned the mix for a good 15 minutes and, once the dust had settled, was left with a thin layer of white sponge the texture of carpet rubber. The taste was fine but the bounce factor, that international standard by which all marshmallows are measured, was sorely lacking. In short, it was marshmallow meltdown.

So I went back to the web in search of alternative recipes. And what did I find? That acclaimed food blog Cooking For Engineers had produced successful marshmallows less than one month ago. And because I don’t want to be seen as following in anyone else’s foodsteps (see what I did there?), and because I’m really jealous of the fact that the site’s author owns a Kitchenaid food mixer and I don’t, and because I can be a right contrary bastard when the mood strikes, I called a halt to my plans and made a quite wonderful organic pear pie from an ancient Piedmontese recipe instead. One day I might even share it with you.

← i am unworthy of your readership
cricklewood conundrum →