I have a theory about cookbooks, that publishers deliberately insert mistakes into the copy in order to give themselves ammunition in the battle against counterfeiters. Sir! I accuse you of ripping off my recipe for apple strudel! Only an imbecile would have followed my directions and used gravel in place of lemon zest! Your honour, I rest my case! And so on.

A perfect example is the case of Antony Bourdain’s recipe for clafoutis, in which temperature and oven-time directions are suggested that would make a pyromaniac blanch. More evidence for this theory can be found on page 455 of Hugh Fearnley’s Mammoth Meat Manual, in which our hippy-headed hero claims that 250 grams of minced pork is sufficient when constructing a sweetbread terrine. 250g? Not in my loaf tin, that’s for certain.

Anyway, let’s go back to the beginning. What is a sweetbread? Although it sounds like a delicious treat for children, some kind of wondrous, sugary bun, in reality it’s entirely made of meat, the kind of meat you get on the inside of animals. There are two kinds of sweetbreads, the thymus gland – whose primary function is the production of cells used by the immune system to battle infection – and the pancreas, which secretes the various enzymes that allow the body to break down digestible foods. The precise location of the pancreas is demonstrated by our model below. 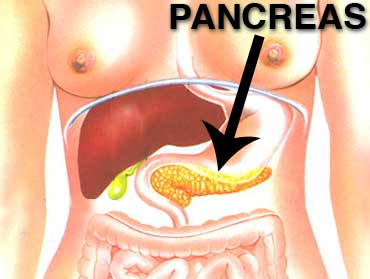 The pancreas I managed to procure came not from a female human, sadly, but from a Dutch calf, courtesy once again of the artisan butchers at Kent & Sons, St John’s Wood. Fully aware that these kinds of innards are of a highly perishable nature, I rushed home to examine my freshly-slaughtered bounty. As you can see from the picture below, it’s not nearly as yellow as suggested by the diagram above. 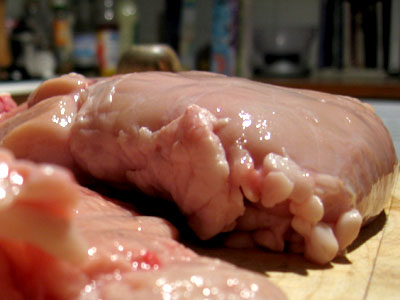 First up, the pancreas is soaked overnight. This removes any traces of blood from the tissue, leaving our mucilaginous friend all pristine and ready for action.

Next, we simmer the pancreas in boiling water for five minutes, which tightens up the flesh and makes the next part of the procedure easier: once the meat has cooled, any cartilage, connective tubes and tougher pieces of membrane are carefully picked off, leaving behind only the finest, most delectable tissue.

And this is where I think Hugh gets it wrong. Lining my rather lovely Le Creuset Silicone Cook â€˜n Bake 24cm Rectangular Loaf Mould (bought for me last Christmas by Blogjam reader Alex in America – and don’t forget, kids, I do have a Wishlist) – with slices of streaky bacon and a layer of pork spiced with sage, thyme, salt, pepper and port, I carefully lay the first sweetbread layer down. 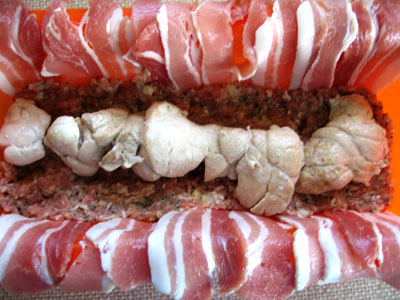 If I had taken Hugh’s recommendation to use 250g of minced pork seriously, I’d be struggling right now. In fact, I’d have virtually none of this so-called “forcemeat” left to complete the next layer. Thankfully, however, I’d decided in advance that such a paltry amount wouldn’t be sufficient, and prepared 750g of the stuff. And guess what? It turned out to be precisely the right amount. I swear, someone should give me a cottage and some cows.

After ninety minutes in the oven and a night in the fridge (carefully weighed down by a house brick wrapped in silver foil), my terrine is ready to be turned out. Here’s an aerial photograph:

I cut a slice and serve it up with a spoonful of Mrs Bridges spicy apple chutney. Hugh recommends his broad bean puree but, to be honest, I fear it’s a little bland. Stick to the meat recipes, HFW, that’s what I reckon. 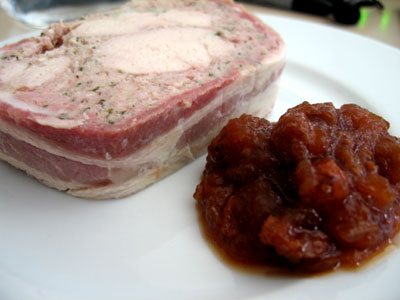 And the taste? Well, it was exquisite; a saliva-inducing symphony of succulence, a tapestry of taste, as it were. And so I took it to work, to share amongst my friends and colleagues.

But virtually no-one wanted any.