Generally, I’ve been pretty lucky with my health. I’ve never had a headache. Or suffered a nosebleed. Or broken a bone. And until quite recently, I’d never experienced a hangover, despite spending most of my twenties and much of my thirties determined to advance the onset of chronic liver damage.

Within the last few years, however, things have changed. For a start, I drink a lot less, but even when I do I still don’t suffer as most seem to – no pounding skull, no nausea, no sensitivity to loud noise – but the night before definitely makes its presence felt on the day that follows. I suffer from a kind of mental lethargy, staring at my computer screen for considerable amounts of time, before realizing with a start that I haven’t actually done anything for ten minutes. And then there’s the digestion issue. Without being too graphic, visits to the toilet become more frequent, more urgent, more painful and, to be frank, more… liquid. It’s not pretty.

So the search for a hangover cure has become paramount. I need something to ease my mind back into the day, something to tighten up the valves downstairs, and several years of intensive trial and error have led me in the direction of two remedies.

Stage one is ice cream, which I believe works for me for two reasons. Firstly, the coolness of product helps to counteract the inevitable post-alcohol sweat. Secondly, both dairy products and eggs are a valuable source of Vitamin B12, a deficiency of which is normal in hangovers – my body is telling me it needs more, and ice-cream delivers.

Stage two is the imbibing of Pepto-Bismol, that remarkable, vibrantly pink remedy for bowel anguish. This stuff is weird, but it does the trick. Years ago, when I worked for outlandishly hirsute rockers The Cure, the band wouldn’t tour without stocking up first. I’d be at my desk, and the call would come in. “Fraser? We’re in Rio, and we’ve run out of Pepto. Can you Fedex us a crate?” And so I would.

Ice cream. Pepto-bismol. Pepto-bismol. Ice cream. After a while, it became obvious. I should combine the two. So I wrote to Proctor & Gamble, manufacturers of the liquid, and asked their opinion:

I am a long-time user of Pepto-Bismol. I like the fact that it is extremely pink, and find it very useful for coping with alcohol-induced bouts of digestive trauma.

But can you cook with Pepto-Bismol? I am thinking of making some Pepto-Bismol ice-cream, and want to know if there are any dangers involved.

With the kind of wild efficiency you’d expect from such a vast organisation, a response swiftly arrived.

Hello and thanks for your e mail.

Pepto-Bismol is a strictly controlled medicine and should only used as a remedy to relieve the symptoms of an upset stomach.

Well, I’m none the wiser. No information. I guess there’s nothing to do but experiment; this is, after all, how advances in medical science are made. And so I gather together the ingredients. 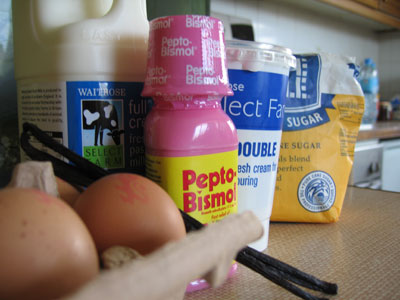 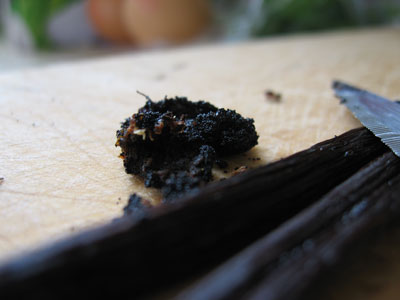 The seeds get added to the cream, sugar and eggs as I rustle up a classic crème anglaise, the foundation of all good ice creams. This custard is taken off the heat as soon as it’s close to boiling (the point at which the liquid can curdle), and rapidly cooled over a bowl of iced water. Eagle-eyed readers will notice the tiny specs of vanilla in the picture below. 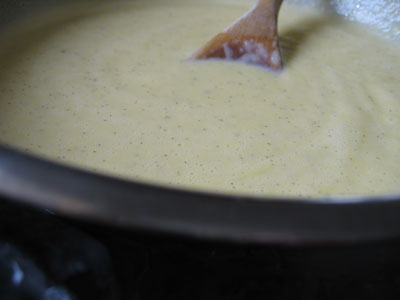 Gingerly – I’m not sure why, perhaps I expect some kind of unholy fusion – I pour in the medicine. Nothing happens. No chemical reaction. No-one dies.

Stirring the ingredients together, however, does reveal a serious problem. The passionate Pepto pink has diminished somewhat, leaving behind a more anaemic imitation. 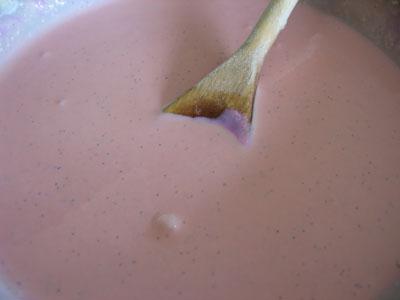 Thankfully, help is at hand. In the far reaches of the blogjam pantry I’m able to score an ancient bottle of scarlet food dye, and add a capful to the brew. 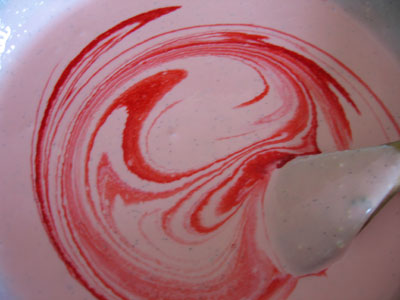 Finally, I pour the compound into my trusty Panasonic Ice Cream Maker, light the blue touch paper, and retire.

While I’m waiting for the mixture to freeze, I revisit the Pepto-Bismol website, where a glance at the FAQ section reveals a previously unheralded paragraph:

Some people feel refrigerating makes the dose more pleasing to take, and that’s OK. However, you shouldn’t freeze the product.

Whoa! Waddya mean no freezing? I’ve just made ice-cream! I need to clarify the situation immediately, and write back to Proctor & Gamble.

I’ve just noticed that the FAQ on the Pepto-Bismol website says that while refrigerating the product is OK, one shouldn’t freeze it. Can you shed any light on why this might be?

We do not have any information about freezing Pepto-Bismol….we can only stress that as a controlled medicine it should only be used as directed on the bottle.

What a quandary! Obviously the girls can’t endorse my ice-cream adventure, but they won’t give me any clues as to why it’s a bad idea either. Penny doesn’t have this information to hand, but P&G must have tested the theory, otherwise the warning on the website wouldn’t be there. What to do?

Eat it, of course! In my book, food without danger is like sex with a condom: it goes in the same entrance, but the experience is altogether less thrilling, less memorable, indeed less satisfying. I fetch the ice cream from the freezer, scoop out a chunk, and admire its pinky goodness. 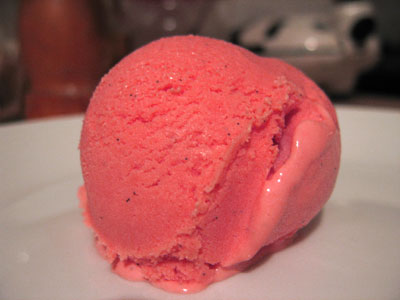 The taste? Actually, it’s quite nice. The vanilla and sugar temper the metallic bitterness of the medicine, giving the end result a flavour not too dissimilar to black cherry. And as a hangover cure? Initial studies are encouraging, with no negative side-effects experienced as yet. A mild mid-week drinking session provided the first test, and while my cross-breed concoction certainly didn’t eliminate the suffering altogether, the benefits did not go unnoticed.

Obviously, if I’m to suggest to P&G that they approach Ben & Jerry’s to produce a commercial version, there will have to be proper clinical trials, with control groups and placebos and suchlike, but I’m hopeful. It’ll sit nicely on the shelves next to my paracetamol bacon roll.

Small-print: As as a controlled medicine, Pepto-Bismol should only be used as directed on the bottle. If in doubt, consult your pharmacist.

← pancreas
Kittenwar on the Colbert Report →