It was the seventh anniversary of this weblog on December 16. No-one noticed, and it’s hardly surprising: a look at the number of posts made in each year since blogjam’s inception reveals a very ugly truth.

If that’s not clear, here’s the decline in graph format.

To be honest, I’m surprised anyone still reads this rubbish, given that I obviously put so little effort into it (although I am surprised by the slightly increased post count last year over the previous). I know it’s easy in these new-fangled days of RSS feeds to monitor sites without actually having to visit them, but still… personally, I’d have gone elsewhere a long time ago.

I don’t even follow my own advice. Back in 2004, when New Zealand’s Net Guide magazine ran a feature entitled 47 key tips from the World’s best Bloggers, I was quoted (that’s how much better this site used to be) saying the following:

“Avoid ‘today I did this’ posts, unless what you did was extraordinary, or unless you can turn it into something extraordinary.”

Let’s examine the evidence, shall we? Here are ten things I did in 2007 that I didn’t blog about:

1) An amazing trip to North Korea
2) A fabulous time traveling round China by railway
3) A wonderful trip to Seoul
4) An incredible four days at a gypsy brass festival in Serbia
5) Quitting my rubbish job
6) A fantastic weekend in Berlin
7) Going to Paris on the first Eurostar train out of St. Pancras. Brilliant!
8) Holding a spectacular launch party for my book
9) Being interviewed by the BBC about kitten cuteness. Wow!
10) A brilliant afternoon learning how to bake at Paul.

Conversely, here are ten things I did blog about.

I really don’t know why you bother.

Just in case I forget what a lovely time I’ve had on holiday, I’ve decided to list a few highlights.

1) The rabbit liver and warm ricotta starter at Peasant. Easily the most glorious thing I ate while away.

2) The American Football. The game had everything: records scattered, a great comeback, a kickoff returned for a touchdown, a 65-yard bomb for the wining score, an onside kick at the death, sporting history unfolding before my very eyes…

4) Philadelphia Cheesesteak. One sandwich at Pat’s, then across the road to Geno’s for another. The best? I’ll go with the more liberal snack.

5) The ice hockey. I know nothing about the sport, but it’s great entertainment; fast, noisy and violent.

6) Good films: The Diving Bell and The Butterfly: brilliant. What more could any film lover wish for than a movie devoted to a man who has a stroke and can only communicate by blinking his left eye? That’s my kind of flick. No Country for Old Men: Pretty good. The first 70% was great, but then it suddenly stopped making sense. It’s possible I fell asleep for ten minutes and missed some vital plot advances. There Will Be Blood: Good. Yep, Daniel Day-Lewis gives the ‘towering performance’ everyone reports, and is probably a shoe-in for the Oscar, but the film tries a bit too hard to be epic – lots of lingering, brooding close-ups of the actor, flames reflected in his eyes, that kind of thing.

8) The Soprano’s Tour: finding myself stuffing dollar bills into a stripper’s cleavage at the original Bada-Bing at one o’clock in the afternoon wasn’t something I’d expected from the holiday, but nonetheless, it wasn’t an unwelcome distraction. Also: the onion rings at Holsten’s aren’t all that.

9) The saffron panna cotta with quince, pink peppercorn and quince sorbetto at Babbo. The rest of the meal? I fear Mario may be resting on his laurels a little, so busy opening pizzerias and publishing books that he’s neglected the restaurant that made his name. I mean, the food was good, but it wasn’t great, and you’ve every right to expect great at one of New York’s best restaurants – and judging by the website, the menu doesn’t appear to have changed much in the last couple of years. I thought it a touch on the unnecessarily stuffy side, and there’s also the weird thing of getting Batali’s choice of (rather intrusive) background music: David Bowie, Red Hot Chili Peppers… it could be worse, but either way it didn’t feel right. It’s also one of those weird places where you’re constantly aware of the other diners, unlike, say, the more crushed but somehow more discreet Andrew Edmunds in London. My starter was the lamb’s brain ravioli with lemon and sage – the sage a little overpowering and the lemon undetectable, while the main was rabbit with brussels sprouts, pancetta and carrot vinaigrette, which was good but a little on the small side (two sprouts?).

12). Getting boozy with my old friend Adrian on the Upper East Side.

1) My helicopter trip being canceled.

4) Being humiliated onstage at the Moscow Cats Theatre, dragged up to face the audience, a stick in each hand topped by a spinning bowl, a cap jammed on my head supporting more spinning tupperware. Never trust a Russian clown, especially when you’re sitting in the front row. Still, at least I was wearing a kittenwar t-shirt, so I’ll consider it a valuable marketing exercise. 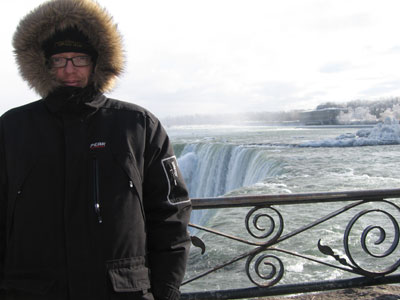 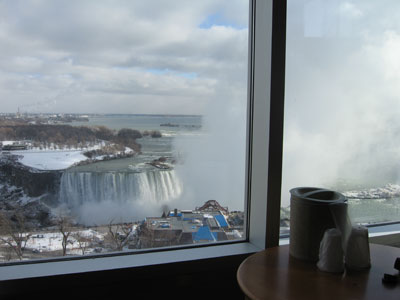 The view from my hotel suite. I’m just about to nip out for a steak, but if anyone wants to join me in the jacuzzi later on I’m in room 1217.