Back in the days when I cared about this website, and a small number of people actually read it, I used to write about (or, when I couldn’t be bothered to write about, list) my favourite albums of the year. The last one of these was in 2006.

These posts never served any valuable purpose apart from enabling me to look back and discover that in that particular year, for example, I believed that the Flaming Lips’ At War With The Mystics was a better album than Joanna Newsom’s Ys. With hindsight, this is a clear example of cloth-eared lunacy.

Then I started work at The Word, where I wrote a little more about music, and contributed to their own end-of-year round-ups. Occasionally, the other members of staff took my suggestions seriously. Oh, what days they were!

But now they’re over. So I’m doing a top ten of my own (disclaimer: contains 16 albums). And here they are, in no particular order other than the order in which they came to me.

Of Monsters And Men – My Head Is An Animal
Yes, they’re the Icelandic Mumford & Sons. Yes, this album is stadium-indie at its most skilfully contrived. But it works. The choruses soar, the heart leaps, and before you know it you’re shouting “Hey!” at the numerous points throughout the recording that require you to do so.

Kimbra – Vows
I bought this album in New Zealand in 2011 and discounted it almost immediately. I was wrong. When it gained a UK release this year, most of the press ignored it entirely. Now it’s they that are wrong, while I am right. Hooray! Live, she’s a miracle in brightly-coloured skirts.

Quakers – Quakers
Portishead have released three albums in nearly twenty years. Meanwhile, Portishead’s Geoff Barrow has released three collaborations this year alone, including the imaginary soundtrack Drokk: Music inspired by Mega-City One and the unpronounceable >> from his Krautrock trio Beak. Best of all are Quakers who, for the uninitiated, are a 35-member hip-hop collective formed largely of MySpace unknowns.

Swans – The Seer
Listening to this is akin to being at the sharp end of two hours of relentless bullying, but don’t let that put you off, honest. It’s brutal, but all the more effective for it. The album “peaked” at #114 on the Billboard 200.

Jóhann Jóhannsson – Copenhagen Dreams: Music from the film by Max Kestner
Pitchfork said of this album, “There’s a general unity that essentially is Jóhannsson as he has established himself, simultaneously classically-tried and placed in a 21st-century context with the technological possibilities provided”, but I have NO IDEA what that means. I just think it’s pretty.

Various Artists – Listen, Whitey! The Sounds of Black Power 1967-1974
Expertly compiled and lavishly sleeve-noted, this is the soundtrack to the book of the same name. Come to think of it, more books should have soundtracks. Apart from 50 Shades Of Grey, obviously. And Stalingrad, perhaps. Possibly the only album where Huey P. Newton appears alongside Roy Harper.

Various Artists – Afritanga
An album examining the African influence on Colombian music might be expected to be a little academic in nature, but, when you get down to it, Afritanga is the sound of swarthy men having more fun than you’ll find in a freshly-laundered set of clown pants.

Kendrick Lamar – good kid m.A.A.d city
He’s been compared to James Joyce (not by me, I hasten to add), but it is fair to say that Kendrick Lamar is an abnormally talented wordsmith. In the old days, when Compton was first a popular hip hop destination, he’d almost certainly have been referred to as a “lyrical gangsta” for his “mad skillz”, or something.

Lee Fields – Faithful Man
Lee Fields is getting on a bit, but his libido retains the friskiness of a buck rabbit. He writes songs about ladies, for ladies, and is backed by the brilliant Expressions, who also make up a small section of the ever-complicated Antibalas / Menahan Street Band / Dap-Kings / Budos Band venn diagram.

Flying Lotus – Until the Quiet Comes
FlyLo, as his friends call him, is the great-nephew of Alice and John Coltrane. This fact alone would get him into my best-of list most years, but in 2012 he also released an album. It’s very good, the kind of thing you might like if you’d like to like modern Radiohead, but don’t like Thom Yorke. Although you should probably avoid Electric Candyman, because Thom Yorke is on it.

Benh Zeitlin & Dan Romer – Beasts Of The Southern Wild (Soundtrack)
I loved this film, and the soundtrack is all the kinds of things soundtracks ought to be, conjuring up images of places you’ve never visited but somehow feel nostalgia for. That it continues to achieve this once you take away the footage is testament to its towering cinematic majesty, and other laboured hyperbole.

Flying Colors – Flying Colors
If there were a more gleaming metal/AOR/prog crossover album released in 2012, then I failed to hear it. And I was listening HARD.

First Aid Kit – The Lion’s Roar
First Aid Kit have lovely hair. Their hair is so lovely, in fact, that I have written a poem about it.

But I think it needs more work.

Jungle By Night – Hidden
It’s quite possible that Jungle By Night are the future of instrumental Afrobeat, despite being entirely comprised of young white Dutch folk. The album comes in a lovely screen-printed sleeve.

Motorpsycho and Stale Storlokken – The Death Defying Unicorn
This is ROCK being punched in the face by JAZZ, while CLASSICAL administers a Chinese burn. I must take issue with the album title, however, because as everyone knows, the unicorn failed to defy death.

So that’s it for 2012. Come back in a year’s time, and you may find I’ve done this again. And that would be super.

For those of you who’ve found their way here via the Radio New Zealand show “Summer Nights”, welcome. And, indeed, kia ora. This blog isn’t updated much these days, so here are a few highlights.

1. My trip to North Korea
2. An invention: Pepto Bismol Ice Cream
3. And another: the Scotch Ostrich Egg
4. In which I write to the contestants of the second series of The Apprentice and mess with their heads
5. Neil Armstrong: The Truth
6. Quiz: Despot or Sexpot?
7. An educational tool: my amazing animal portal
8. Eating at the Fat Duck

If I was updating this blog on a regular basis, it would be far to claim that it’s been an ongoing part of the web’s digital fabric for exactly ten years, today. But I haven’t been. So I’m not going to do anything of the sort.

Blimey. It’s close to 3000 hours since my last post. What a fucking shambles.

So, what have I not reported on?

1) My holiday to France, Belgium, Germany, Austria, Romania, Hungary, Bulgaria, Turkey, Iran and Syria. It was great, although eight days on a train for a man of my advanced years isn’t something I’d recommend lightly. Highlights included the cross-eyed hotelier in Tehran, the racist, permy-haired light entertainer in Romania, and a visit to the World’s biggest restaurant. Pictures are below.

2) My trip to Iceland, doing my best to save their ravaged economy. Highlights? Eating puffin, swimming in the Blue Lagoon on a blisteringly cold night, and that exhilarating Arctic wind. Photos follow.

3) Finishing my animal eating A-Z for The Observer. The full list of articles is contained in one nifty package here. I’m especially fond of ‘Y’, for yak.

6) Buying an internet radio, listening to weeks of pre-election build-up on C-Span, and realizing that the most dangerous part of democracy is the bit where ordinary folk are allowed to vote.

7) The Hank Williams Unreleased Recordings box-set. To draw a parallel, this is like finding five previously unheard Beatles albums, all better than the original releases. Literally country & western-tastic.

10) Getting to review the new AC/DC album for the mighty WORD magazine. This is one of life’s checkbox moments, like visiting the Grand Canyon, eating at the Fat Duck, or sharing a bed with two of Girls Aloud.

11) Realizing, finally, that Bjork is never going to leave her husband for me. Or Lila Downs. Or Yma Sumac. Mind you, she’s dead, and when she was alive she was really old and stuff and probably smelt of ointment, so that’s possibly a good thing.

12) Realizing that I obviously have a bit of a thing for foreign ladysingers.

Blogjam.com, as it appears in Iran. I must be in league with the Great Satan.

Bollocks to this, I’m off to Belgium, Germany, Austria, Romania, Hungary, Bulgaria, Turkey, Iran and Syria. 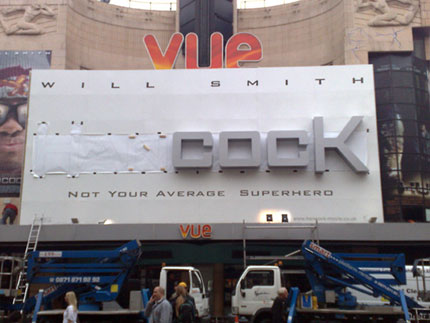 I’ve written up a roundup of my short-lived stab at vegetarianism over at The Observer’s Word of Mouth blog. It’s actually a pro-vegetarian entry, in the sense that I think they’re often short-changed with regard to the meat alternatives I sampled and the lack of options available at many restaurants, but you’d never know it from the vitriol that rained in. C’est la vie. I do wonder, though, if a column written by a vegetarian bemoaning the same lack of choice would have been received in a similar way. Perhaps the image I used to decorate the piece gave people the wrong idea.

Breakfast: Neglected, as I sleep in.

Lunch: A very interesting pesto pasty from Deli de Luca, a Norwegian cross between Pret a Manger and a 7-Eleven.

Dinner: The hotel menu doesn’t appear to have any vegetarian options (the Â£15 salad includes cured sausage), so I nip across the road for a falafel kebab. It’s not bad, although anything in pita bread is difficult enough to eat as it is, so why you’d want to add sweetcorn into the equation is beyond me.

One of the things I don’t like about some vegetarians is the continual bleating about the lack of choice for vegetarians on restaurant menus. You know what? I really don’t care:

a) You’ve made your choice. Presumably you factored in this kind of ‘hardship’ when you made that decision. Now live with it. Don’t bitch about a situation you knew you were getting yourself into.

b) Eat somewhere else. I just did. It wasn’t difficult.

I’m writing this on the morning after Day Seven. I’ve just been down for breakfast. In true Norwegian style, it came with meat. Lots of it. Sausages, bacon, various hams and salamis. None of it was particularly good quality, but I piled my plate high and ploughed through the lot. It wasn’t the best thing I’ve eaten in a while (Thursday’s couscous gets that honour), but it wasn’t bad, and some time in the next couple of days I’ll eat something that’ll top anything I’ve enjoyed during World Vegetarian Week. It may well be fatty. It might contain blood. It might quite possibly be to the detriment of my long-term health. I may feel the veins around my heart tighten or swell as I eat. And yet, it will be quite delicious in a way that nothing I’ve had over the last few days has been.

It’ll be made of meat, and I will love it.