In some ways, it’s been a reasonably good week. I received my first cheque from Google Adsense, signifying the moment that the blogjam network turned the corner and actually began to make a profit, taking the first step on the long road towards becoming a multi-international conglomerate cash cow employing tens of thousands of eager people who will worship me and sing my name and bow whenever I pass. I also got a story placed in Private Eye magazine (clue: the piece mentions the words ‘paedophile’ and ‘vigilante’ – but it’s not in the online version – go and buy a copy, cheaspskate). So I think I’ll celebrate. Bollocks to this, I’m off to Turin.

When people pass away, they’re invariably described as being ‘unique’. While this rather trite observation can easily be applied to anyone who tumbles off this mortal coil (with the rare exception of Dolly The Sheep, perhaps), it does appear to carry some real weight where John Peel is concerned. For a start, he was probably the only person in the World to be a fan of The Bhundu Boys and Bum Gravy.

I met John Peel once. I was working at a radio station, and we’d invited him to guest on a show. This in itself was unusual enough; a rival broadcaster appearing on a station which, to all intents and purposes, was competing for the same audience. The fact that both parties were happy for this to happen was a measure of the man, and to compound the unusual nature of the occasion John turned up half-an-hour early, and by himself. In a business filled with gargantuan egos most usually accompanied by PR lackies and other hangers-on, John rolled up alone, knocked on the door, put his feet up and sat down with a cup of tea.

Like anyone in the UK serious about music, I’d gone through a Peel phase, huddled obsessively next to the radio eagerly awaiting the next session track from Head of David or Prong. I’d even been present at the recording of a couple of Peel sessions, and fully expected to fill the time until he went on air by boring him with questions about The Four Brothers and Bolt Thrower, and why the BBC studios at Maida Vale were used more often for recording bands than those at Golders Green. Instead we talked about religion, and then death. To this day I’ve got no idea how the conversation developed along these lines, but it ended with John saying how he didn’t believe in any sort of afterlife, that such a thing would invalidate the very point of living. If there’s more when you’re gone, why hang around? Why not cut out the middleman and get straight on with the cherubs and fruit trees and waters of life? Every moment of our time on Earth was there to be experienced and, above all, savoured.

Now I don’t expect for a moment that this offers any great insight into the personality of the man, and I’m not really sure what point I’m trying to prove. Or even if I have one. But the conversation stayed with me. Peel was a bumbling, loveable and, it seemed to me, contented fellow; someone who’d lived a life he probably wouldn’t change a moment of, and who knew precisely how lucky he was to have done so.

Of course, if he’s wrong, and there is a house band in Heaven, I hope they’re playing Ukrainian Electro Death Dub. And if they’re not? Then he’ll probably find one that does.

The following picture was submitted to the random kitten generator by someone called Dave. 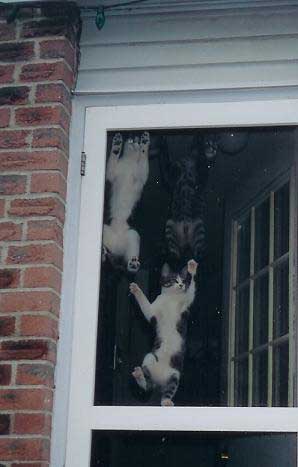 As they tend to say in Internet circles: WTF?

Update: I heard back from Dave. He says.

My cats don’t climb the screen door anymore now that thay’ve grown up. The lightest one is 10 pounds and the biggest is 17 pounds… I don’t think they would be able to do it anymore.

Well. I think that’s a pity.

A couple of weeks back I wrote an entry called don’t ask jeeves. This title planted the seed of an idea in my head, and I was somewhat surprised to check and discover that no-one had registered the domain name. So I purchased dontaskjeeves.com myself. I built a page which ripped off the original Ask Jeeves design, replacing the super-efficient and helpful Jeeves character with one who, although looking identical, was much more cantankerous and unfriendly. You could insert a search term, and Jeeves would refuse to deliver any results, instead returning a rude message and a link to a random site completely unconnected to your search.

Although this sounds like the most hilarious thing ever, it didn’t really work too well in reality. I’m not too sure why, but I wasn’t happy with it, so I never linked to it. And now, you’ll never get to see it. Today I received an e-mail from my webhosts with a cease and desist order attached from Morrisson and Foerster, Attorneys at Law. MoFo, as they’re brilliantly known in real life, were acting on behalf of Ask Jeeves, and claimed that I had infringed the company’s copyright. Which I had. Obviously. Guilty as charged, your honour. So I took the page down, rather than have my webhost terminate my account.

Anyone want to buy a domain name? Good condition, one careful owner.

I tested out a new stats package this evening. It’s by far the best externally-hosted traffic monitoring site I’ve come across – you’re not expected to link back to them, and the feature set is extremely impressive. Even so, after four years I’m still looking for a stats package I’m actually happy using. I’d prefer to have something I can host myself, in which case it needs to be able to cope with 2 million plus page views per month, and I want something that lists all referrers, not just the most recent 100 or the top 100. I also want full (and clickable) referring URLs, not just domains. If anyone can suggest anything that suits, where I can tag my pages (rather than software that analyzes the raw Apache log files like Webalizer or Analog) I’d be really grateful. At the moment I use AXS, which I love, but it can’t cope with the amount of traffic the kittens receive without me having to delete the log files every day.

Anyway, I was looking over this new stats package, and a particular visitor to blogjam caught my eye.

I’m tempted not to dwell on this too long. So I’ll just say that it’s nice to receive vistors from Islamic countries with such unexpected interests.

I don’t like Friendster much – it’s social networking with no discernable purpose, as far as I can see, apart from serving as some kind of gigantic popularity contest. Look how many testimonials I have! See how funny/generous/handsome everyone thinks I am! Not that I’m ungrateful for the nice things people have said about me, of course – thanks ladies – every word you say is the truth.

Anyhow, Friendster have a web search engine. It’s not very good. In fact, it’s crap, but what’s mildly interesting is that Friendster keep a track of all the requests made, which they compile into handy lists showing the search terms that are popular within your network of friends. This, supposedly, will give an insight into the kind of personalities aligned with yours. Quite frankly, it’s terrifying.

‘Emo hair’ is the biggest concern amongst my friends? ‘Vampire Name Generator’? ‘What’s my phone number spell’? For fucks sake, how old are these people? Do they not have real lives? If they were searching for pornography I’d be less concerned – at least it would signify that puberty had been successfully attained – but these terms suggest that my network is filled with twelve year-olds. I know that this is not the case – in reality it’s made up of adults, including a professor of anthropology and at least two company directors – but this trend is still a concern. I think I may have to go and get myself a new, more hi-brow set of friends, with whom I can converse about trends in post-Soviet Union Russian literature and the impact of Ingmar Bergman’s early 1960s work on modern film making. For the rest of you, here’s a which emoticon are you? quiz. Go mental.

Weird fact: the illustrator who provided all the images for Ricky Gervais’s new book Flanimals, Rob Steen, also designed one of my tattoos. As this design was a one-off, it’s probably worth money now. Perhaps I should carve the relevant chunk of flesh out of my arm and auction it on eBay.

Following the success of my earlier identify an insect project, a Mr Sword from NASA has written to me, asking if I could help establish the identity of a rather strange, moth-like creature photographed by his daughter in Baton Rouge, Louisiana. Of course, I’m only too pleased to assist America’s space programme and display the picture. Apologies for the blurry nature of the image. 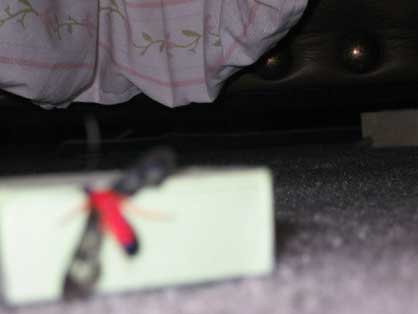 Whatever this winged critter is, it sure is red. This suggests to me that its natural environment is either a) Mars (it’s possible – this image was sent from NASA, remember), or in pots of rasberry jam. But I could be wrong – I’m not an expert. Can anybody shed more light on the situation by putting a name to this flying scarlet behomoth?