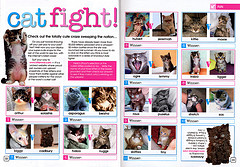 Marvellous. More kittenwar PR hit the nation’s newstands today, as a double-page spread featuring the site appeared within the hallowed pages of Shout Magazine, a very popular read with teenage girls, or so I’m led to believe. I’ve put a scan up at Flickr.

And no, this is neither the good news or the bad news. It’s merely the interim news.

By the way: I may let this run for a few days, just to prolong the agony. Or the excitement. Or the tedium. Depends on your point of view.

What would you rather hear?

As it’s Valentine’s Day and I’m without a lady to entertain, I thought I’d check back through the years to see what else I was up to on previous versions of February 14, more than anything else to reassure myself that life hasn’t always been such a desperate solo career.

That hasn’t helped at all. It seems as though the annual celebration of all things romantic is a blighted no-go area, a grey and unhappy land of tortured solitude and bleak horizons here at chez blogjam.

Think I’ll whack some Leonard Cohen on the wi-fi, wrap myself up in my grubby, tear-stained duvet, huddle up with a bottle of Fronsac (Chateaux Vieux Ciron 2000) and work up a healthy stock of self-pity.

So today I’m walking down the street where I work, and I spot former England footballer and TV pundit Peter Reid. He’s dressed smartly, has a suit-bag slung casually over one shoulder, but otherwise looks a little flustered. He quite clearly doesn’t know quite where he is. I decide to get involved.

Me: Hey Peter! Are you lost?

Peter Reid: I am actually. Do you know where this is? (hands me a business card)

I believe that this is the first time I’ve had to give a celebrity directions since I misled Princess Diana as to the whereabouts of Marylebone Lane in 1989, causing a delay in her journey which may ultimately have contributed to her death.

Please feel free to leave any casual celebrity encounter stories in the comments below. I’d be delighted to host them.

Disclaimer: if you’re not a blogger, or are unfamiliar with the ways of the so-called ‘blogosphere’, I wouldn’t bother reading this post. It probably won’t make much sense, and it’s a minute of your life you’ll never be able to claim back.

meme n. A unit of cultural information, such as a cultural practice or idea, that is transmitted verbally or by repeated action from one mind to another.

Actually I don’t hate all memes. I just hate those that masquerade as blog content; those bloated, flatulent exercises in pointless fuckwittery perpetuated by idiots who don’t even have the necessary talent to fire up an anorexic paragraph of half-capable prose. Perfect example: The Friday Five. If honesty were at home, it would be called the “My head is completely empty, I have nothing to say, so here’s some pointless drivel that makes my hopeless shitsack of a website look up-to-date Five.”

The Tuesday Twosome? Once again, a more honorable title would read something along the lines of “The I’m incapable of sentient thought because I’ve spent the best years of my life engaged in a loving yet futile relationship with my computer. I am a witless oaf, and am not worthy of your pity Twosome.”

My god, there’s even a web page devoted to cataloging the damn things; a gleaming, rancid repository of hapless blog sewage.

It was with a heavy heart, therefore, that I received notice of being ‘tagged’ by two different bloggers, both of whom should really know much better, yet still requesting that I continue one such meme.

And because I can’t be arsed writing something that requires thought, and because I should probably let my few remaining readers know that I’m not dead, and because I’m a contrary old cock, I’m going to do so.

Four movies you could watch over and over:
Magnolia
Underground
Bladerunner
Hoop Dreams

Four places you’d rather be right now:
Offline
Svalbard
Tuva
Between the slowly tensing thighs of a supermodel

Now let’s see how those fuckers get on.