Ooh. I found yet another blogjam. This one is hosted at blogspot, and went online three days before I started posting here, on December 13 2000. It lasted for just two posts, as opposed to the 1051 I’ve manfully delivered at this address. Ergo, I win.

Anyway. Why is it that some people ask questions of search engines, instead of entering search terms? It’s as if people expect to be able to insert a phrase like “What colour should I paint my bedroom?” and the search engine will reply, “Well, Janet. It’s a south-facing room, and the trees across the way block out much of the early-morning sun, so I’d suggest something light. Maybe a pastel blue? It’ll compliment the bathroom delightfully. And how’s the family? Is George still in hospital?”

Here’s some recent questions people have asked search engines on their way to blogjam. I hope they found what they wanted, although I doubt much solace was to be found within these pages. Some of this is really quite disturbing.

how can i find friends for my schizophrenic brother?
where is the liberal outrage at iraqi’s beheading people?
why am i ugly ?
am i having a girl or boy?
howdo I get my ex-girlfriend back?
why does my husband lie about everything?
why won’t my wife fuck me?
why did i fuck my son?
why does the gym teacher make my daughter uncomfortable?
is fraser lewry really the king of the world?

OK, so that last one was me.

There’s a room to let at blogjam towers. Please form an orderly queue.

I read a lot of press releases composed by record companies and PR agencies. These documents are produced to accompany an artist’s latest piece of music, to provide ammunition to journalists and present the music in glowing terms. Depending on the money being spent on the promotion they’re generally written by a) the most junior person in the office or b) a ‘name’ journalist familiar with and favourable to the artist.

Occasionally, however, this wanton turd-polishing stops. Today was such an occasion. The debut single by Brakes arrived in the office, and I’m delighted to be able to reproduce the press release here.

Brakes are like totally hot scenester hipster friendsters who like totally meet up to discuss punkin’ new hair moves, denim pocket designs and awesome postcodes. These guys are so totally bomb they’ll make you shit out of your ass. They are so totally pimpin’, so whatever dude, so go fuck yourself they could be zeitguests on the forum of rad. Buff? Uh! Touch yourself. This band is sick.

Brakes debut single Pick up The Phone is released on TUGBOAT on 20th September 2004.

I’ve no idea whether this is something written by a disgruntled employee that somehow slipped through the net, or whether (as I suspect) it’s a cunning piece of linguistic tomfoolery, probably written by the band themselves, designed to make people who read press releases all day sit up and pay attention. Either way, it’s a work of genius. Brakes, I salute you and your 24-second single.

Crikey. I really should have trademarked the word ‘blogjam’. This week it’s turned up as the title of an event taking place in October featuring, and I quote, selected readings from your favourite queer bloggers. Former Hüsker Dü and Sugar frontman and all-round musical genius Bob Mould appears to involved. Bob has been blogging since January, which is about as exciting as news gets round these parts. It’s pretty cool – he rattles on about his latest projects and what he’s up to, and posts links to rare punk mp3s. We like.

Whenever I claim that I’m partially responsible for the popularity of kittens on the Internet (as I frequently do), I actually feel like a fraud. This is because any contribution I’ve made in this field is very slight indeed, and the true reason our diminutive cat friends are so popular is down to the work of one man, Joel Veitch. Veitch’s animated kittens have brought him more success than eBay, earning the animator an estimated twelve million pounds per month, and I hear an IPO is imminent. If this weren’t enough, Joel has returned to blogging with the The Blog of the Crab of Ineffable Wisdom. Already the standard is high – as early as the second entry he’s referencing the morbid fear of wheelbarrows held by flightless birds in Brazil. The rest of us may as well retire.

I’ve been tidying up around here. The about section has been re-written using the traditional lazy blogger’s fall-back, ’50 facts about me’, and the features section has been updated. A new section has also appeared – network – this is a place where I can store details of the other sites I’ve done that are hosted by blogjam, like the one about kittens, the one if you need violin lessons in London, and the one about my sister’s time in Iraq.

I might do this as a list on Amazon: people whom I’ve seen perform live who are now (sadly) dead:

I recently took a photo of a strange looking insect in a meadow in New Hampshire, USA. Maybe some kind of wasp? It has a very long abdomen with several projections. I haven’t had any luck finding a site that I can send the photo in for identification. I wonder if I can send in the photo and maybe you can post it. Who knows, maybe some burgeoning entomologist will recognize it and put an end to the mystery.

Randy, your wish is my command. If this works, I think I may start a regular insect identification service. 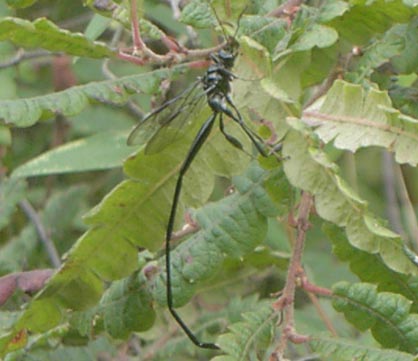 Personally, I imagine it’s some kind of Satanic harbinger of doom, an early warning sign that the apocalypse is surely upon us. That thing looks positively evil.

I received a text message this evening from someone I don’t know. This is always more amusing than a wrong-number call to your phone, because the sender isn’t aware they’ve made a mistake, and probably fumes about the lack of response. Here’s the message:

Apart from responding by complaining about the lack of ‘g’s at the end of the suffix used to form present participles, I think I’ll react by telling ’em I’ve been down the pub getting absolutely bladdered with my mates, and that horses are more stupid than guinea pigs, but without the personality. I’ll let you know how the conversation develops.

As regular readers will know, I’m a cat lover. I don’t have a feline companion of my own, however, living as I do in a flat with no real garden. I could get an indoors cat, of course, but I don’t think that’s fair – cats should spend their days scrambling up trees, chasing birds, and marking out territory by burying cat-dirt in the soil.

I do miss not having a moggy round the place, though, so you’ll understand the tremendous excitement felt at blogjam towers tonight when I tell you that I’m placing an order for a genuine robot cat from Japan. The process will take a while – a friend is ordering the cat from Toys R Us in Japan and having it delivered to her parents in Zushi, from where it’ll be shipped to the UK. I can’t wait.

Update: Everything was going so well, but then my Japanese friend discovered that the Nearme™ cat has one major flaw – it cannot walk. So that’s another fine plan down the drain, unless I can locate a spare $1500-$2000 to buy a Necoro which, let’s face it, is unlikely.