Bollocks to this – I’m off to Edinburgh.

Fuck me. 1000 comments. Life hasn’t been this exciting since Kaycee Nicole died.

Hooray for Christmas. I’d like to take a moment to thank each and every blogjam reader for reading and commenting on the site during 2004. Your continued support means more to me than any of you will ever know… excuse me, but I think I have something in my eye.

Anyway; for a special, personal, festive thankyou, I suggest that you insert you name in the field below, turn up your speakers, then click the submit button.

Once again, I thank you.

Ooh, bugger. I just realised that it’s the fourth anniversary of blogjam. Or at least it was a week ago. It’s amazing how thin I can spread this muck. So instead of celebrating the occasion I thought I’d share a couple of corporate Christmas cards. The first is from Xfm, who have taken a picture of the Libertines and branded it with their own logo, celebrating heroin abuse in the way that only a media conglomerate can. Next up are Palm Pictures, whose card is interesting in that they use some music by Norwegian drum ‘n bass maestros Xploding Plastix, despite the fact that (as far as I know) the band have no connection with their record label whatsoever.

In other news, I received a mail from someone called Linda, who says:

I just wanted to say hello. I was reading about jellybean and forgot about doing lyrics and music. I am not doing well at all. anyway hi and bye for now. Linda.

And I found yet another blogjam. Will this torment never end?

I’ve just been off to visit my mother in the delightful, picturesque English village of Wollaston. It’s a nice enough place, I guess, but it scares me a little: I’m sure if you scratched the surface you’d find a veritable hot-bed of wife-swapping splosh parties and Daily Mail-inspired nimbyism. My mother runs the local museum (it’s a voluntary role), which is an interesting place because it contains all sorts of weird-looking stuff. Traditionally, local industries in the village have been shoemaking (Dr Martens boots first rolled off the UK production line here in 1960) and agriculture, and many of the items in the museum are strange looking tools that, at first glance, appear to be instruments of medieval torture rather than something you’d use during the dayjob. There’s a couple of items she’s been unable to identify, so I’m posting pictures here in the hope that some kind blogjam reader will be able to diagnose their use. 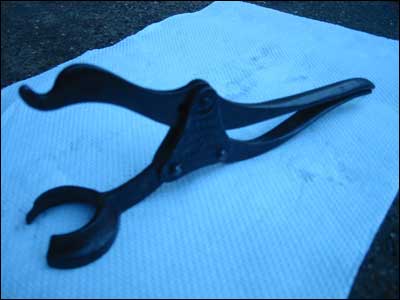 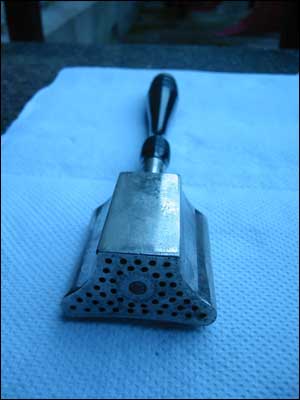 Congratulations to blogjam readers, who have now listened to more than 1000 hours of blogjam radio. This makes me the most popular personal channel at Last FM, more than 600 hours ahead of the next most listened-to station.

Smallprint: It’s entirely possible that I’m personally responsible for listening to the bulk of those 1000 hours, and that my taste in music isn’t nearly as attractive to others as I like to pretend.

In other news, I have what we single folk term ‘a blind date’ tomorrow night. Long-term readers will know that I very rarely talk about other people I know or meet in these pages – I just don’t think it’s fair unless they’ve also elected to go online and embarass themselves on a regular basis as I have – and I’m not going to start now. So I’m not going to tell you how it goes. Unless, of course, it’s a disaster, and I can seize yet another opportunity to triumphantly humiliate myself in public.

At some point, this site changed. It used to be about other people doing stupid things, but these days, more often than not, it’s filled with the riveting minutiae of my own shabby existence. I’m not quite sure why this is, whether it’s some kind of freakish, public therapy, or whether it’s just because I like talking about myself. Either way, I’m not quite ready to stop.

I finally got through to someone at Blueyonder who had some answers (see post below). It turns out that access to my files had been restricted for two reasons. 1) Offensive content. He couldn’t tell me what, precisely, but it appears that someone had complained about something to Blueyonder, and they’d shut me down without further notice. 2) Excessive bandwidth consumption. Now this is fair enough – I’d been shifting 300-400GB of data per month, which is a lot of traffic for a Â£4 monthly fee. It’s kind of sad to see the company’s legendary ‘unrestricted bandwidth’ myth finally exploded, but I’ve had a good run. Anyway, the upside of all this is that the random kitten generator is back, with new kittens added. We can all sleep easy once more.

And look: I got quoted in Mac User magazine:

Things are not going so well. First up, the new PC I ordered turned up but didn’t work, blue-screening every couple of minutes, and has had to go back to the manufacturers, sick-note in hand. Secondly, and more worryingly, Blueyonder (who have thusfar been absolutely peerless as a secondary webhost) appear to have, well, fucked up quite a bit of my content. Three lengthy phone calls to the company have failed to resolve the matter, with technical support unable to offer any assistance whatsover. The last gentleman I spoke to suggested that it was most likely that I had “accidentally deleted the site” by “changing my FTP settings” which, for all you non-technical folk out there, is what we Internet types like to call ‘laughable’. For a start, my content dropped off the radar at 2.55 last Friday afternoon, and given that Friday was a day off (I spent it waiting for my broken PC to not show up), and that at the time I was across London retreiving said no-show computer from some Godforsaken warehouse in North Acton, the chances of me having been able to perform such an accidental erasion are, shall we say, slight in the fucking extreme. The issue has been passed on to another part of the Blueyonder technical department to be resolved, and I’ve been promised an answer within three days. I’m hoping that the content is still there, just unreachable (which, for all you non-technical folk out there, is what we Internet types like to call ‘despairingly clinging on to futility for dear life’).

I’ve managed to retrieve some of the other stuff from various dodgy mirrors round the web, so the Pork Pie Tribute and The Truth About Neil Armstrong are both safe, but I can’t access any of the files I was storing for twisted web genius Joel Veitch either. Curses.

Serves me right for getting my iPod cheap and for being sexually attractive to women, I guess.