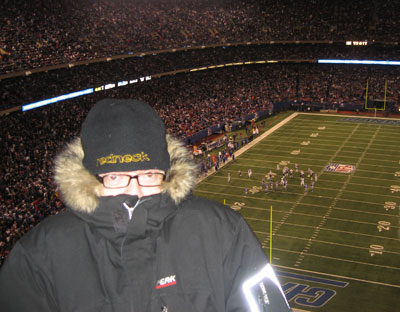 Me, a few hours ago, as the Patriots come from 12 points down to defeat the Giants 38-35 and end the season with a unique 16-0 record. And yes, it’s pretty cold.

Hooray. It’s time, once again, for my definitive guide to the best music of the year. This time round, I’ve decided to use the magic of embedded YouTube videos to showcase the albums do it the same way I did last year, so that you can make you’re own mind up as to whether I’m a) full of marvelous musical wisdom, or b) full of shite.

1) Only two hip hop albums, both by white artists? Ouch.

2) Perhaps worryingly, my favourite song of the year is also by a white rapper.

3) It’s a much folksier selection than usual.

6) Most overrated record of the year? Stars Of The Lid’s And Their Refinement Of The Decline. Let’s compare two viewpoints:

“I simply feel that they are making the most important music of the 21st century.” Ivo Watts-Russell – 4AD label founder.

“What a load of noodley old bollocks. Don’t be suckered into buying this twaddle.” Fraser Lewry – blogjam.com

7) Tip for 2008? The Imagined Village will win the Mercury Prize.

My walk to work takes 25 minutes. It’s a fairly leisurely ramble, certainly not part of any ludicrous fitness campaign, with the iPod generally switched to shuffle to accompany the stroll. One day last week, the following track took its turn. It’s Atlas, by Battles.

It’s perhaps the most infectiously rhythmic record of the year, and a remarkable thing happened. My stride lengthened. I walked with a greater urgency. And I seemed to get to work a little more quickly than normal.

So today I tried something. I followed my regular route to work, but I only played this track. Each time it finished, I started it again. By the time I reached the office my knee joints were aching and my calves aflame, but I’d shaved an entire three minutes off my normal journey time.

I wonder if this technique would be of use to Britain’s Olympic hopefuls. I’d certainly like to think so.

POSSIBLE FACT: When Battles signed to Warp Records, they apparently spent all of their advance on the mirrored box you see in the video. I would love this to be true.