Working in the throbbing heart of London, as I do, there are thousands of sandwich bars and cafes within a few minutes walk of my office, each attempting to to quell my lunchtime rumblings with a bewildering bounty of buns, baps, baguettes and benoîtons. It’s not easy, but I have a favourite: Paul.

From humble beginnings as a family business in Lille, the Paul chain now encompasses more than 250 stores in France, whilst worldwide the brand can be found on high streets from Morocco to Japan. In the UK alone there are nearly 20 branches, each serving up a delicious range of fresh sandwiches and fancies, with more than 100 types of bread adhering to recipes that date back more than a century. It’s glorious, mouth-watering stuff. 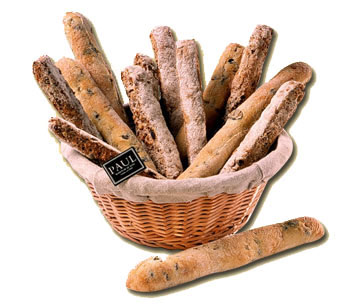 My particular favourite sandwich is the mixte, a simple mix of crusty benoîton, succulent ham, creamy emmental cheese, and butter so fine it must surely have been suckled from the teats of velveteen cows by busty French milkmaids. It’s really quite something.

In early December I sat at my desk and ate just such a sandwich, each mouthful a treat of rare and dreamlike proportions. Halfway through, however, my blissful reverie was interrupted by a jabbing pain in the roof of my mouth. The source of this discomfort was revealed as I pulled out a splinter of wood an inch long and an eighth of an inch wide, square at one end and tapering to a sharp point at the other.

Being the concerned consumer that I am, I walked the remains of my lunch back to Paul and quietly presented it to the manager, leaving my details and explaining that I’d like to be notified if they could trace the source of the splinter.

Five days later, a letter was hand-delivered to my office. Sent by the company’s Head of Production, it went into great and reassuring detail about the steps Paul take to make sure this kind of thing doesn’t happen, and offered an explanation for the alien body in my bread:

The style and quality of bread that we make is dependent on a number of things: consistent temperature and reasonably high temperature to name but two. We also adopt and use full artisan skills so that each of our loaves, however small, are hand-made. To fully complete the picture, as a surface to work on we use stainless steel in preference to the artisanal beechwood tables called parisiens as we perceive it to be safer: having said that though we have a beechwood parisien in the bakery at Covent Garden which we have used in the past for bread workshops which we hold for our customers, staff and on occasion journalists. On 5th December the day before you had cause to complain, we had held one of the workshops and had transported the parisien for the purpose during which it had suffered some damage. That night the bakers used it as they were short of space. This is the only route which I can find that could possibly result in you finding the splinter that you did.

All very comprehensive, and highly plausible. The letter went on to list some of the bakery’s safety procedures, and suggested that I should come and tour their premises, to put my mind at rest. It rounded things off by promising to contact me within 24 hours to talk through the matter in more detail.

Now this, you might think, is great customer relations. And you’d be right, except for one thing: contact never came. Not a whisper.

So, after Christmas, I wrote back:

Many thanks for your letter of 11th December (attached). I thought I’d write as I haven’t heard back from you as promised, although I understand how things can get a little hectic over the Christmas period.

I really appreciate the lengths you’ve gone to investigating how the splinter of wood found its way into my sandwich. I’ve been a regular customer at Paul for several years, and I don’t dispute that your safety procedures are second-to-none. The reason I handed the sandwich back was not because I doubted this, but because I just figured you’d be keen to figure out if there was anything you could do to prevent similar incidents from occurring again.

I’ve continued to shop at Paul (albeit at your branch on Old Compton St) and have no plans to stop. As for the offer to inspect your premises, I’d be delighted to do so: not because I need convincing about your food safety procedures, but because I like your cakes and sandwiches. The Mixte is a particular favourite, as are the macaroons.

And guess what? Nothing. Nada. Zero. Zilch. Or, as they say in France, rien.

The annoying thing about this entire episode is that I wasn’t all that perturbed by the splinter, despite the fact that it could have torn a gaping hole in my throat, leaving me writhing on the floor gasping hopelessly for air as visions of my woefully unfulfilled life passed swiftly before my eyes; no, I took the sandwich back, not because I doubted the safety of Paul’s methods, or because I thought there was a genuine threat to public health, or even because I wanted a refund or a replacement (I didn’t ask for either). I returned it because I thought they’d be keen to get to the bottom of the matter, to ensure it couldn’t happen again.

What has dismayed me is that they’ve resolutely failed to deliver on their promise to talk through the matter and invite me to their premises, despite my prompting. It’s more than two months later, and not a peep. 48 hours has stretched into 72 days, and I’ve started to use a different branch of Paul, too embarrassed to return to my favourite Bedford St outlet while the matter remains unresolved, instead frequenting their smaller, less salubrious shop on Old Compton Street.

I am not happy.

I genuinely think I may be going a bit mad.

Lately I keep on waking up thinking I’m sharing the bed with someone. And instead of thinking, “Oh my fucking Christ, there’s someone in the bed with me” and panicking because I don’t know who they are, I think, “How embarrassing. I’m naked, with a stranger”. And I reach around on the floor to find my underpants and put them on to preserve my modesty. At this point I generally wake up properly and feel foolish. The other night I went one better, waking up and wondering where the person in my bed had gone — I then wandered naked around the flat looking for my mystery guest before, once again, waking up properly and returning sheepishly to bed.

I have no curtains in my front room.