One of the curious things about getting older is that pleasure is derived from things your younger self simply wouldn’t appreciate. Fifteen years ago, the formative me would be enthralled by the prospect of a Butthole Surfers tour or an unattended crate of brown ale, while the older me likes nothing more than to purchase something shiny and gleaming for the kitchen, and is seldom happier than when scanning the Sunday supplements for new and exciting recipes. Recipes like Hugh Fearnley-Whittingstall’s Lamb In Hay, where seventeenth century French tradition meets pretentious middle-class culinary experimentation in a friendly, made-for-TV package.

Apart from being something of a fire-risk, which is exciting, there are no obvious reasons to bake a leg of lamb in hay, apart from the fact that it’s a talking point in itself. There are many other ways to prepare the meat, all of which are satisfactory and require neither a trip to the pet shop nor a cooking process that makes your kitchen smell like a overly damp barn. Nonetheless, it’s what I conjured up for my dinner guests yesterday, and I feel duty-bound to report my findings. 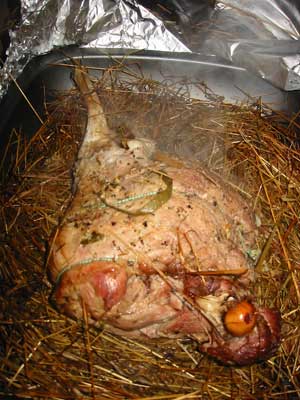 And there it is. The top layer of hay has been removed to reveal the succulent flesh beneath and, by golly, it is tender, a genuine melt-in-the-mouth sensation. The only problem is the flavour. The meat is delicious but it tastes, perhaps unsurprisingly, of hay. Lots of hay. This would be fine were I a horse or a guinea pig, but for human beings the sensation is somewhat unsettling. So why would anyone cook using this method? I can only assume that the meat French peasants were using four hundred years ago was so overwhelmingly rancid that this process was necessary to disguise the fetid nature of the food, much like chili sauce on the modern-day kebab.

And Hugh Fearnley-Whittingstall? Don’t believe a fucking word he says.