These patchy scribblings at the blogjam empire have led to some exciting places – being a runner-up in the inaugural Guardian weblog competition, being named one of the World’s best weblogs by Web User magazine, and being offered free sex (almost) are just three examples.

But all this near-success pales into shoddy insignificance when compared to my latest coup – getting fan-mail from the very lovely former adult film star Asia Carrera. Asia, it turns out, is a cat lover. Not only has she submitted a picture to kittenwar, (an image which is scoring very nicely, thank you very much for asking – currently topping the kittenwar chart), but she’s uploaded a couple of shots to my most recent venture, the wildly successful Cats In Sinks. Asia wrote to me asking how many kittens were competing at kittenwar (as I write it’s 18,607), which led to a short exchange of e-mails. I complimented her on the high standard of photographs uploaded, and she responded by saying:

There’s nothing wrong with being obsessed with cats – I’ve had many, and I’ve shot 10,000 pictures of every one of ’em, so I have a mega-arsenal of adorable kitty pics to submit! I spent 10 years of my life being shot from every angle, so it’s only fair I subjected my cats to the same scrutiny.

Marvellous stuff. Not only is Asia the only Carnegie Hall-playing member of Mensa to have carved out a bewilderingly successful career in pornography, and an obvious cat lover, but she’s also the only adult star to have written to me. Personally. What a nice lady. 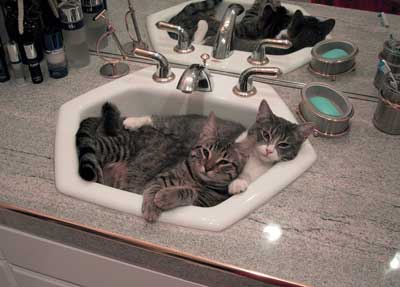 You can read Asia’s bulletin page (post dated 9/11) for her take on kittenwar.