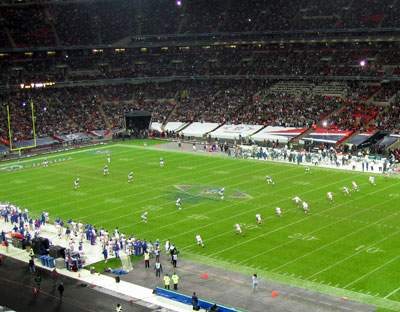 I went to see the Miami Dolphins play the New York Giants tonight, the first regular season NFL game to take place outside the US. And I have some observations.

1. I generally like American Football: ‘intensity’ is a much abused term when it comes to sport, but it applies to this game when it’s firing on all cylinders – I can’t think of any other team event where each and every athlete is physically operating at close to 100% when the ball is in play, and it can be genuinely gladiatorial in a way that few other sports can match. Having said that…

2. Wembley doesn’t suit the sport. Because each touchline is patrolled by an endless parade of coaches, physios, kitmen and the 40-odd players not involved in the action, the first ten rows of seats are emptied so that no-one has a restricted view. The result? The nearest punters are the best part of 40 yards from the action, and the atmosphere suffers accordingly.

3. This was an awful, tedious game, albeit in lousy conditions. 65 sodden, slippery rushing attempts does not make for high-class entertainment.

4. There’s no other game so obviously constructed for the benefit of those not in the stadium. It shouldn’t take three hours to play 60 minutes of sport, no matter how much money is being spent on TV advertising. When the players are continually standing round waiting for commercial breaks to end so they can resume the action, all momentum lost, you know the game is well and truly screwed.

5. It doesn’t have to be like this. Anyone who’s watched a game of American Football with the clock ticking, no time-outs left and the attacking team running no-huddle offense knows that it can be genuinely thrilling, edge-of-the-seat stuff. It’s a pity the rules conspire to make this the exception rather than the rule. 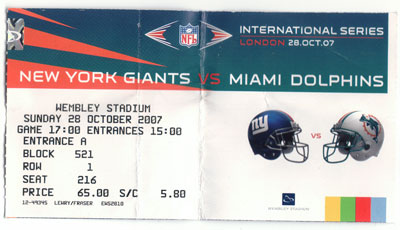 6. I can’t imagine I’d be too happy to be a Miami Dolphins fan: you only get eight home games per year, and you probably pay the best part of $1000 for a season ticket. Now you find out you’ve got to fly to London for a ‘home’ fixture, with all the expense this entails and a weak dollar topping things off nicely.

8. What’s with all the moronic call-and-response cheer-leading? I’ve noticed this creeping into English Football (at the Emirates, the announcer reading out the Arsenal team-sheet will shout ‘Theo!’ and the crowd responds ‘Walcott!’). It’s as if we’re not able to make noise or create atmosphere without being prompted like five-year-olds learning basic addition. Here, the announcer calls, ‘It’s another Miami Dolphins…’ and the faithful shout ‘first down!’ It’s truly idiotic.

9. Why is Wembley never sold out? Once again, there were numerous blocks of empty seats scattered throughout the stands, despite NFL UK claiming over 500,000 applications for tickets. And just like the soccer, many of those occupying the corporate spots failed to return after the half-time break until the final quarter had all but expired. All those empty seats must look great on TV.

Next time, I’m going to watch it from my sofa.