48 hours, and I still haven’t snapped.

Lunch: I had to ask someone where the nearest health food shop was. Weirdly, this was not a comfortable thing to do – I felt like I had to lower my voice to a conspiratorial level, as if I were asking for directions to the local STD clinic. Later on, when I owned up to why I’d needed the information, my colleague looked relieved, and told me she’d immediately been worried about me… which is a bit weird. Why, if someone wants something from a health food store, do we tend to assume it’s because they’re unhealthy? Surely it should be the other way round? What does this say about those who frequent these stores? Or does it say more about those who don’t? Buggered if I know.

Anyway, I stocked up on products from the Redwood range of fake meat, and swiftly wolfed down a box of Vegi-Deli Cheatin’ Chicken Style Pieces. Remarkably enough, the pieces tasted almost exactly, spookily, like the real thing. I say almost because they weren’t quite right in two ways: they didn’t have the succulance of a lovely bit of thigh cooked to perfection and dripping with herb butter, and secondly, it’s odd producing a product that impersonates the type of chicken at the end of the market that no right-thinking meat eater would ever go near: the nugget. It’s probably too much to ask for immaculate lumps of water, wheat gluten, sunflower oil & vegetable fat, soya protein, potato starch, flavourings, yeast extract, salt, sugar, thickener (carrageenan and onion powder), fermented rice & spice extracts to be shaped into perfect breasts, but still, if people are looking for an alternative to the real thing, I’m not sure if a visual copy of something many people associate with reclaimed meat and cheap southern-style chicken joints is the way forward. And yes, the biggest single ingredient really is water.

Dinner: I used to go out with a vegetarian. She cooked a lot of Linda McCartney dishes (I would link to the UK website, but it’s one of those pointless affairs that re-sizes your browser), and I developed a bit of a taste for the bangers: not because they were just like real thing – they weren’t – but because they had a nice, spicy taste and texture of their own. The Redwood Lincolnshire Style Sausages are similar; a bit dry, and nice enough, but completely without the fat that provides the the richness and subtle beauty of the real thing. I guess this is fair enough, what with the dish coming from a health food shop, but it does provide ammunition for the theory that these alternatives are more about function and less about pleasure. I also wonder about the name: can you really call a sausage ‘Lincolnsire-style’, when the two main identifying features of the original are that a) they’re made in Lincolnshire (the Redwood sausages are made in Northants, as far as I can tell), and b) they’re made of meat (these, obviously, aren’t). How, exactly, are they ‘Lincolnshire-style’?

Still, at least I was able to build a Beano-style plate full of bangers. Nice. 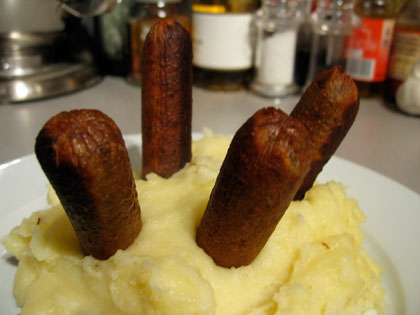