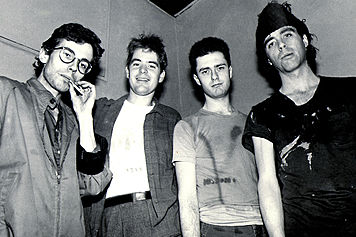 More by accident than by design, I briefly found myself in Mission Of Burma’s dressing room this evening, and was introduced to the band. While this might not mean much to well, virtually everyone, it meant a lot to me. Mission Of Burma invented 1980s American alternative music, picking up bits and pieces from bands like Pere Ubu and The Gang Of Four and paving the way for pretty much everyone who followed. No Mission Of Burma? No Pixies. No Pixies? No Nirvana. It’s as simple as that.

So anyhow, they’re still brilliant. Roger Miller wears ear-protectors and places a sheet of perspex between himself and the drum-kit (he has tinnitus, caused by playing too loud). Clint Colney looks like Al Pacino’s camp younger brother and fronts three of the best alternative tracks ever – ‘That’s When I Reach For My Revolver’ (covered elsewhere by Graham Coxon and Moby), ‘Academy Fight Song’ (covered by REM) and ‘That’s How I Escaped My Certain Fate’, while Peter Prescott is still the best singing drummer in rock ‘n roll (with the possible exception of Levon Helm). They finish with a version of The Wipers‘ ‘Youth Of America’, which is like the great lost American band covering a song by the other great lost American band. Magnificent.