There’s two things that stand out for me about getting older:

2) I fall asleep in front of the TV on weekend afternoons.

I haven’t got round to properly addressing the first issue, but the second is under control. As soon as I feel the eyelids begin to sag, it’s off to the the kitchen to brew up an instant extra-strength Douwe Egberts latte in the microwave. Ten minutes later, with caffeine coursing through my twitching veins, I’m alert and able to concentrate more fully on the television, deliriously wondering why Granada Men and Motors is only on late at night.

Today was slightly different. Instead of the usual freeze-dried sweepings, I opt for Civet Coffee, described on the pack as “the rarest coffee in existance”, of which “only 500KGS are found each year”, produced “after fermentation in the civet’s digestive tract”. 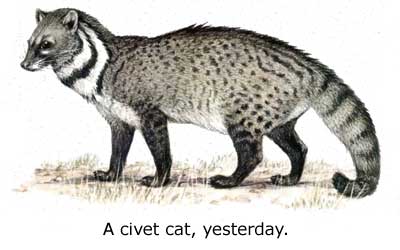 Yes, you heard me correctly, and the way it works is this: The Common Palm Civet Cat (actually part of the Mongoose family, and feared by many to be a possible source of the SARS virus) prowls the coffee plantations of Sumatra at night eating only the finest, ripest cherries. The stones – which eventually become coffee beans – are then collected by workers, who comb through the cat droppings to find them. In case this still isn’t clear, I’ve produced a flow chart to document the process.

So what’s it like, this coffee? As you can see by the picture below, I first test its aroma. It’s possible that it has a slightly nutty tang, but I’m no expert, really. If I’m honest, it just smells like normal coffee. 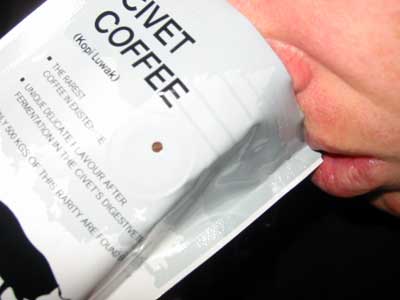 It looks just like coffee too, all brown and powdery. I fire up the French Press and brew up a sample, and once in a mug, well, it tastes like coffee. Nice coffee, sure, but at the price this stuff sells for you’d want a least of hint of civet digestive tract to linger; a soupçon of gastric juice or a small trace of expelled mammal scuzz. But there’s none of that. Just coffee. 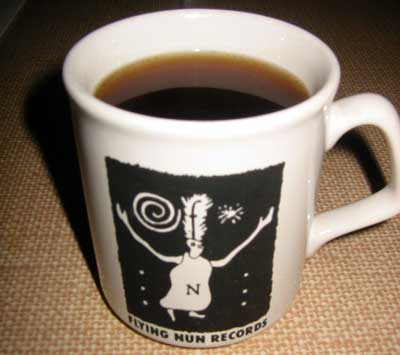 After three mugs I’m feeling a little wired, but I’m no closer to understanding why this stuff is so expensive. Does scarcity automatically equate with price? If I ran some beans through a domestic cat, I’m pretty sure that (even at its most efficient) it wouldn’t produce anything like half a tonne of stock annually. Could I charge accordingly?

Civet Coffee is available from the Algerian Coffee Stores on Old Compton Street, in the heart of London’s popular homosexual district, or online from the manufacturer, who also produce a nice line in regurgitated weasel coffee as well as some tea that’s been hand-picked by specially trained monkeys. It costs Â£22.95 for 57 grams.