A very big welcome if you’re visiting blogjam for the first time today, drawn here by Stephen Jelbert’s mouth-watering meat exposé in the Independent. Please take a look around – and if you’re after the dishes mentioned in the piece, follow these links:

…for your next food-related post, I’d be very impressed if you were to try some durian fruit. Apparently it’s delicious, if you can get past the horrendous smell. Which in itself is interesting, as most things tend to taste and smell the same, or at least very similar.

Indeed they do, Ant, indeed they do. Even the processes themselves are broadly similar – the direct chemoreceptors of the taste buds, those cells that allow us to distinguish between the five basic flavours (salty, sour, sweet, bitter, and umami), work along the same lines as the distance chemoreceptors of the nasal channel that control our sense of smell. The major difference is that taste requires actual contact with the item in question, whereas smell doesn’t.

And so to the durian. Native to Indonesia, Malaysia, and Brunei, the fruit can now be found all over Southeast Asia. It’s known as both the world’s most dangerous fruit (weighing up to 6KG and covered in laceration-inducing spikes, it can easily crush an unwary tourist’s skull on its short journey to Earth) and as the ‘King Of Fruits’, a term used throughout the region.

What it’s most famous for, however, is its smell. Top food scientist Harold McGhee reveals in his brilliant encyclopedia how the fruit uses this aroma to attract elephants, tigers, pigs and other jungle creatures (in order that they might eat the pulp and further spread its seed), and how some of the sulphuric compounds found in the durian are also present in onions, garlic, overripe cheese, skunk spray and rotten eggs. Some quick research on the web revealed the following, less scientific, descriptions of the scent of this most odour-ridden of foods:

You get the idea. This stuff has a reputation. Even the nice checkout lady at Colindale’s excellent Oriental City supermarket, where I procured my example, raised her eyebrows and asked if I knew how bad the smell could be, telling me that it could “stink like dead cow”.

Price is also an issue of concern to the UK buyer. Esteemed Saigon-based streetfood blogger Noodlepie says the durian fruit costs about 12,000 Vietnamese Dong locally – less than 50 British pence – while my imported and defrosted version is 1500% more expensive – about the same price as half a kilo of organic sirloin steak in London.

As you can see from the picture below, in which I’ve placed the fruit next to an appropriate CD by the Thai Elephant Orchestra, it’s a bit of a monster, but it doesn’t smell too explosive, giving off nothing more than a faint whiff of burnt rubber fermenting in parmesan. 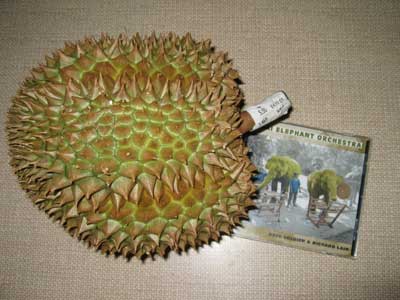 Cutting it isn’t easy. I’m forced to use an old snowboarding glove to prevent the fruit’s spikes from carving tattoos into my hands, but pretty soon I’ve split the beast asunder and am able to inhale deeply. 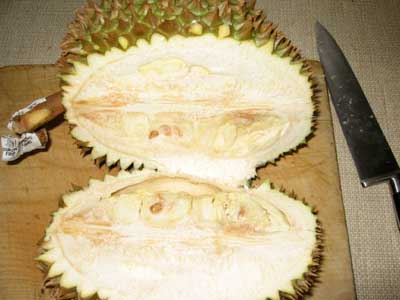 It doesn’t smell quite as strongly as I thought it would (I expect that the stench from fresh examples is far more potent), but the blocked drain comparison is pretty apt. Gagging only slightly, I scoop out the flesh, which has the texture of slightly stringy mud, and take a mouthful. 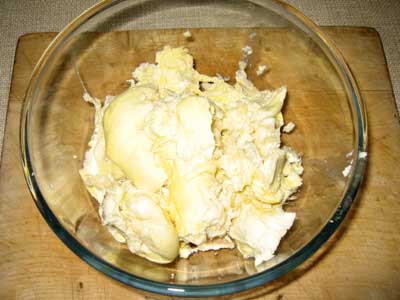 The 19th century naturalist Alfred Russell Wallace described his first taste of durian as being “flavored with almonds, but intermingled with wafts of flavor that call to mind cream cheese, onion sauce, brown sherry and other incongruities.” I think Wallace got lucky. My example tastes like decomposing apple soaked in garlic and, while it’s not completely unpleasant, it’s a little disconcerting to find this in a fruit, and it’s not nearly as sweet as I’d like. Ice cream is the answer. 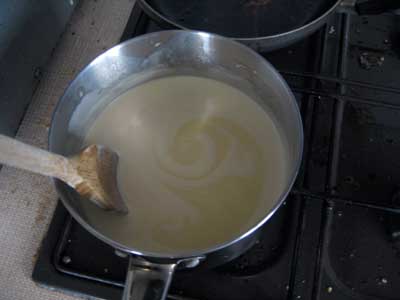 I quickly rustle up a custard of milk, cream, sugar and egg yolk, add a couple of teaspoons of vanilla extract, slowly heat the liquid, then combine with the durian pulp. After a few hours in the freezer (stirring occasionally to prevent the formation of ice crystals), I have my ice cream. 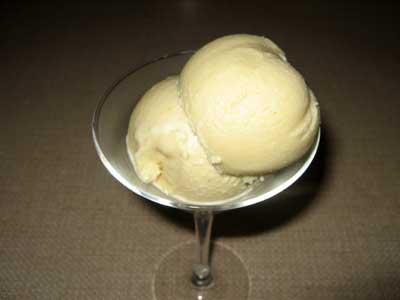 It’s not bad. The sugar and vanilla have taken the edge off the garlicky tang, and while the smell is still slightly off-putting, the taste and texture are much improved. It’s another triumph for the blogjam kitchen.

Don’t forget to tune in next week, when I’ll be testing durian flavoured condoms.