I went on a date once. I know that’s hard to believe, but it’s true. The young lady in question has since gone on to become a great success in her field, with a regular column in the Daily Mirror. She appears on GMTV, has written for Heat, and turns up regularly performing talking head duties on those dreary pop-culture countdowns that clutter up the schedules at Channels 4 and 5. More recently she’s been seen on Big Brother’s Little Brother as resident expert on all things housemate. Don’t all scramble for google at once.

It was a strange affair. Our eyes met in a crowded pub after some indie-gig-or-other, and before you knew it we were huddled in a corner desperately trying to figure out what it was that we might have in common. The answer, somewhat surprisingly, was Geri Halliwell. She was obsessed with the whole Girl Power phenomenon, then at its peak, whilst I was an ardent fan of Ginger Spice’s more-than-ample bosom. And, if truth be told, I was quite fond of some of that first album, in a desperately insulting post-ironic fashion.

So we arranged to meet. Somehow I ended up promising to make my date a Spice Girls Spice Rack, hastily cutting out pictures of the five spices and pasting them to a rack purchased just for the occasion. We met in a Spanish bar in central London, I offered my gift, and in return was presented with a plaster model of Geri, hand-crafted, a limited edition of one. It’s just about the best thing anyone has ever made for me. 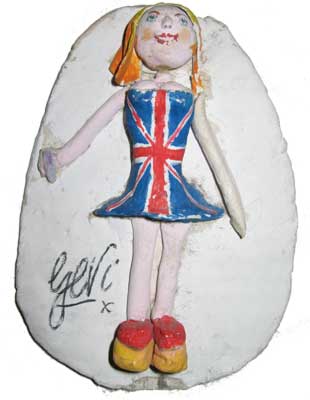 Anyway. The date was only a mild success, she went on to form a serious if ultimately calamitous relationship with one of my best mates, and Geri swiftly mutated from voluptuous pop princess into idiotic, wizened crone.

And the reason I mention all of this now? Because she popped up very briefly in a dream last night (the date, not Ms Halliwell), wearing an Indian sari with a giant pair of nappies over the top.

I am not quite sure what this means.