I went to see Arsenal play Fulham last week. It was a good game. Pascal Cygan came within 180-odd goals of breaking Ian Wright’s club scoring record, and some flashy French fella also bagged a brace. It was a nice evening out, and a pleasure to see the Arse play a game at the old stadium before they move up the road to their new home, where the crowd will hopefully be able to generate the kind of atmosphere one normally associates with a game of football.

List of grounds where I’ve experienced a livlier atmosphere than last week’s: 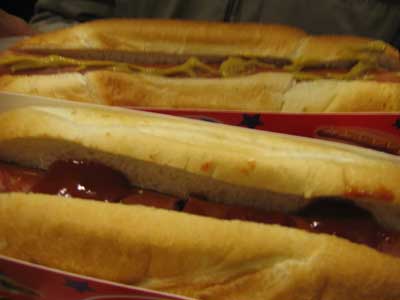 In a word, rubbish. This unfortunate half-time faire was manufactured by Rollover Hot Dogs of Slough, who claim great things for their product.

So I wrote to them.

To whom it may concern,

I sampled one of your hot dogs last week at Highbury, tempted by your claim boasting of “the best hot dog in the World”.

Sir, this is misleading. Any street vendor in New York City will serve up a dog superior to your miserable alchemy of taste and texture, the blandest item to have passed my lips in some considerable time. It troubles me that you feel able to label the flaccid, tasteless dough surrounding the equally sorry bockwurst a ‘fresh French baguette’, when it quite clearly bears no passing resemblance to the delightful, crusty, golden-brown wonders served up by any half-decent Parisienne patisserie.

As for the sausage itself, may I take a wild guess and suggest that the ‘unique recipe’ you claim to adhere to is nothing of the sort, unless its unholy litany of ingredients features a liberal amount of stale cardboard?

A more accurate name for this so-called food would be a ‘Not So Hot Dog’.

Yours in deep disgust,

I await their response with near-feverish anticipation.