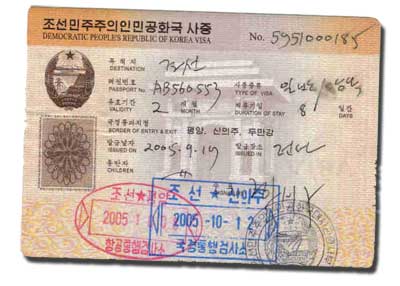 The plane is a slightly battered, rear-engined Ilyushin with bus-style overhead racks, shrieking jets, and a carpet that appears to have been purloined from a Leicester curry house in 1973. On board we’re served the largest airline meal I’ve ever seen, our trays overflowing with typically mediocre airborne slop, but the flight itself is smooth, the stewardesses are attentive and friendly, and copies of the English-language Pyongyang Times bring us news of Kim Jong-il’s latest exploits, offering on-the-spot guidance to the faithful. It’s gripping stuff. 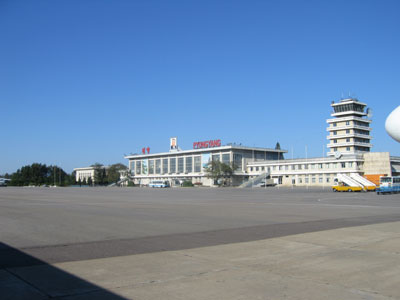 Air traffic control at Pyongyang International is not a full-time job.

After passing through customs and immigration without fuss, we’re separated into groups and meet our guides. Ours is Mr Lee, an elegant North Korean with a sharp suit and extravagant nasal hair, assisted by the pretty but prim Miss O, a language student obviously nervous at the prospect of spending the best part of a week ferrying irresponsible foreigners about. We clamber aboard the bus, driven by another local, this one with a big smile, negligible knowledge of English, and a peculiar resemblance to Christopher Walken. On the short drive into the city centre Mr Lee gives us the welcome speech, telling us about Pyongyang and how global warming has led to a ten-degree increase in the average summer temperature. We all nod our heads politely in deference to this particular revelation, and get used to the idea that not everything we get told on tour will tally with what we’re led to believe by meteorologists back home.

Our first stop is The Grand Monument, a 20-metre high bronze statue of Kim Il-sung that sits proudly atop Mansu Hill. Kim stands in front of a mural of Mount Pektu, his arm outstretched to show the way forward for the Korean nation, most of whom appear to be queuing up to pay their respects at the foot of the statue. 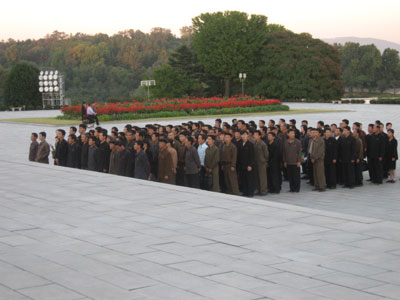 It’s an operation of near-military precision. Each immaculately attired group takes it in turn to pay their respects, moving forward on some unseen signal, depositing a bunch of flowers at the Great Leader’s feet, then bowing in unison before exiting stage-right to leave room for another batch to do the same. Soon it’s our turn, and we find ourselves gazing up at the Eternal President in all his bronzed glory, revolutionary music wafting across the dusk, and pay our respects. It’s an uncomfortable moment given the Kims’ reputation in the West, but most of us seem quite happy to do as expected, not wanting to cause offence in a place obviously considered sacred by the locals. When in Rome, etc. 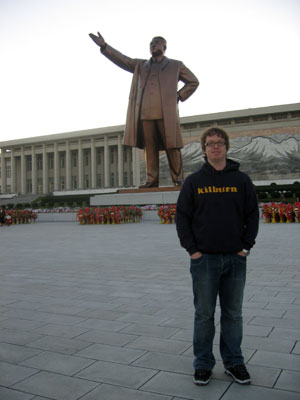 Next up we’re taken to our hotel, the Pyongyang Koryo, 45 floors of once-luxurious splendour that’ve seen slightly better days. It feels a bit moth-eaten, a little stale, but the rooms are large and comfortable, the views are spectacular, and the restaurant makes up in kitsch appeal for what it might lack in culinary innovation, adorned with models and cutouts celebrating the 60th anniversary of the Workers Revolutionary Party. It’s a big deal in these parts. 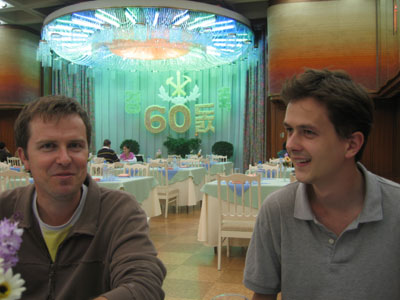 Highlights of dinner include kim’chi, a spiced cabbage dish we’ll be served at every meal throughout the trip and gradually come to loathe, and a slightly suspicious looking battered fish creation. 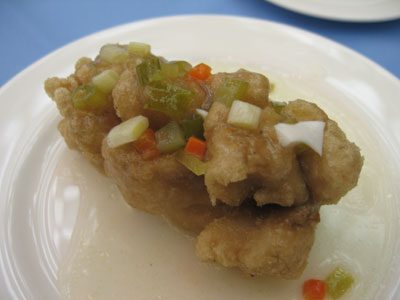 Very quickly we’re ushered back on the bus for one of the highlights of the tour, the Arirang Mass Games, taking place this year for the first time since 2002. 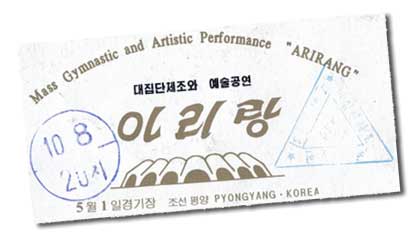 It’s extraordinary, an Orwellian wet dream choreographed by Walt Disney, a festival of brilliant colour, outrageous gymnastic skill and breath-taking discipline. Thousands of school children cartwheel, tens of thousands more control an ever-shifting mosaic stretching from one side of the 150,000 capacity May Day Stadium to the other, motorcyclists ride tightropes across the sky, soldiers parachute in from the roof, and athletes perform extraordinary acrobatic feats across the arena floor. 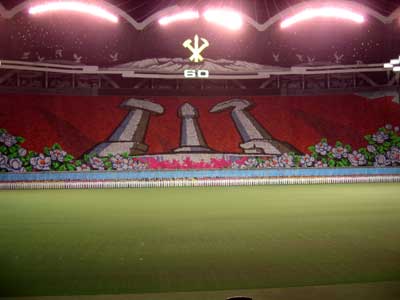 You put your left leg in… 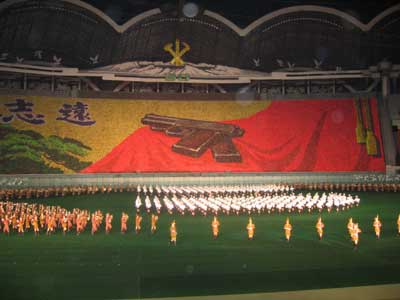 You take your left leg out… 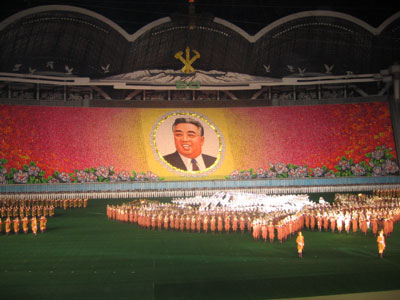 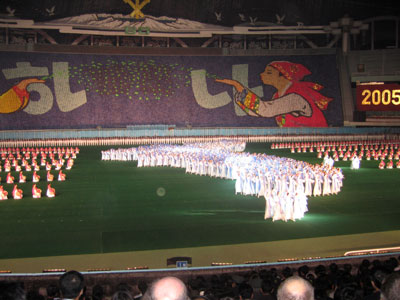 You do the hokey-cokey and you turn around… 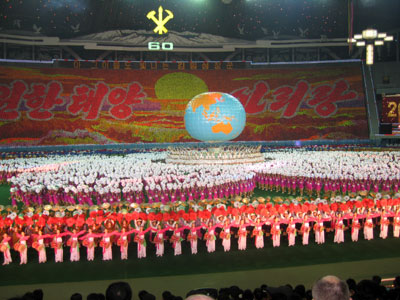 That’s what it’s all about!

After ninety minutes it’s over, and we’re hurried out of the stadium and back to the hotel. We visit the shop (among the items on sale are North Korean biscuits and a motorbike) then retire to the bar to sample the local draught, an almost black, malty affair served in proper pint pots. Everyone is breathless with excitement, discussing the first day’s events and the following day’s plans. It’s difficult to believe that we’re really here – it genuinely feels like we’ve landed on another planet – but the beer tastes good, the group is beginning to gel, and I’m not even bothered when the girl drinking next to me starts rattling on about Sting’s charity work. 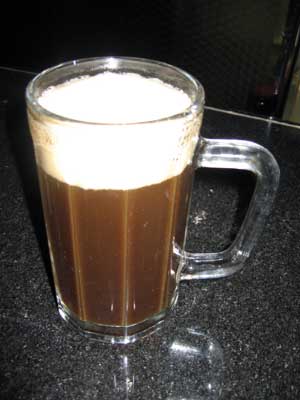