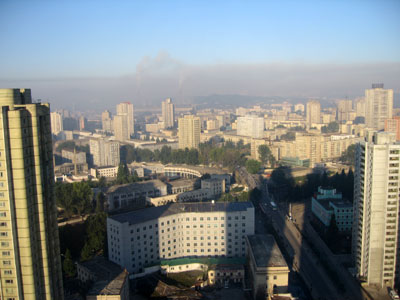 I’m not looking forward to the next few hours. Ever since Air France decided to send my luggage on a different holiday to my own, I’ve wasted a great deal of time attempting to replace items I need for the trip, basic essentials such as socks, shoes and shirts. Today we’ve been requested to wear more formal attire, and locating clothes that fit comfortably hasn’t been easy for a man of my sporting bulk, especially in the trouser department. Even Beijing’s finest department stores were little help, and I finally had to settle for a pair of brown strides that, despite an eye-catching XXL tag, would much better fit a man of less magnificent girth. Lying on the floor of the hotel and struggling to jostle my thighs into these pants to achieve something approaching comfort isn’t easy. It’s not going to be an aggreably snug day.

And the reason for all this dressing up? We’re being taken to the mausoleum of Kim Il-sung. I’ve seen Lenin’s and Mao’s tombs previously (if I ever get to see Ho Chi Min’s embalmed remains I’ll have completed the set), and they’re not terribly impressive affairs – you queue, you stroll past, you exit, you buy the cheap ceramic mug. Kim’s promises to be an altogether more grand episode. For a start, his final place of rest isn’t some drab concrete block, but the gigantic and lavish Kumsusan Memorial Palace, where the Fatherly Leader spent much of his working life. 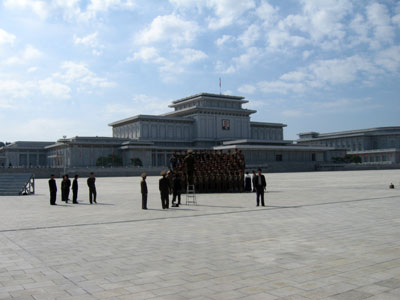 A photo op outsisde the palace.

We quickly learn that this isn’t going to be a straightforward visit. We’re asked to leave anything in our pockets on the bus – wallet, keys, cigarettes, lighters, pens etc – and check our cameras at the cloakroom before passing, one by one, over a short conveyor belt that brushes the soles of our shoes. Then it’s through a metal detector and up an escalator, joining an airport-style travelator at the top that slowly and gravely carries us towards whatever’s next. Pyschologically speaking (there’s something I’ve never said before) it’s a brilliant piece of design, moving hundreds of people about the palace in complete silence, helping to maintain the eerie, reverential atmosphere. After 500 metres, we turn a corner to finally be confronted with whatever’s next: another travelator, another 500 metres. The tension builds further.

Finally deposited at the end of the walkway, it’s up a red escalator, around a corner, and into a vast white marble hall, completely empty apart from a colossal statue of Kim Il-sung bathed in peach and purple light. We stand in lines, four across, and solemnly march the length of the room to stand briefly in front of the sculpture before being beckoned into another room. Inside are a series of pods, one of which we step through, cold air blowing onto our clothes to remove, one presumes, dirt and germs from outside.

Another corner, and there he is. The Eternal Leader. The atmosphere snaps with near-religious intensity as we circle the glass casket, awkwardly bowing on each side as custom dictates, armed soldiers keeping a close eye on our behaviour, muffled sobs from some of the visitors disturbing the silence. Within a minute we’re in the next annex, the walls covered in a three dimensional panorama showing the Korean people’s reaction to Kim’s passing in 1994. There’s an audio commentary accompanying the exhibit, with an increasingly hysterical British voice relating how ‘the tears of the people fell to the ground and turned to stone’ on hearing the terrible news, etc. Next up is a room where thousands of diplomas, doctorates and medals awarded to Kim during his lifetime are kept on display, generally from tinpot regimes and cowboy governments in Africa, South America and The Middle East. Oh, and France.

And that’s it. This afternoon we’ll be heading south to the DMZ, the somewhat heavily-militirized demilitirized zone, the area Bill Clinton referred to as “the scariest place on Earth.”

Bill got lucky. He didn’t have to wear these trousers.