It’s 160km from Pyongyang to Kaesong and the DMZ, but it’s an easy route to follow: just turn into Thongil Street and drive for an hour and a half. Simple. There’s barely any other traffic on the road, and the only major attraction passed is the Monument to the Three Charters for National Reunification. This is a 30-metre granite statue showing two women representing the divided Korean peninsular leaning towards each other in a gesture of reunification, a scene also acted out at the previous day’s Mass Games. Interesting, the figures shown at the foot of the ‘South’ side of the statue are portrayed as cowed, pleading for help, while those to the North are strong, healthy specimens offering assistance to their beleaguered southern cousins.

The journey is otherwise uneventful, and soon we arrive at Panmunjom, a few kilometres beyond Kaesong, home to the most intense concentration of military personnel on the planet. US troops used to be based here, but withdrew in 2004, leaving the Southern soldiers face to face with those from the North. Despite all of this, the atmosphere is surprisingly carefree, the military guide showing a scale model of the area before clambering on board our bus to guide us further into the DMZ. It’s here we learn how the two sides are still officially at war – an armistice was agreed in 1953 bringing a temporary halt the the bloodshed, but a peace treaty was never signed. Outside the Armistice Hut I have my picture taken. 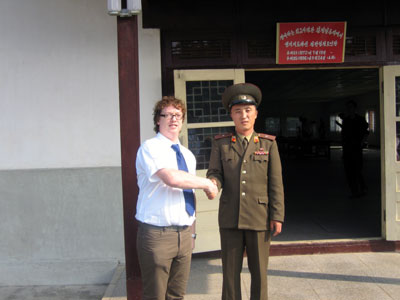 My new trousers are too tight, they don’t match my tie, and I could only have this photo taken if I stood two steps below the military guide. These factors combine to make me look like a twat.

Another kilometre into the DMZ finds us at the Joint Security Area, where North Korea comes face-to-face with America and the southern ‘puppet army’. Until recently tourists could enter one of the three small blue huts that straddle the demarcation line, circling a table and technically crossing into the Republic of Korea, but we’re disappointed to learn that the Americans have apparently put a stop to this, simply by putting a padlock on the door to the hut. Never let it be said that warfare in 2005 isn’t a high-tech affair. 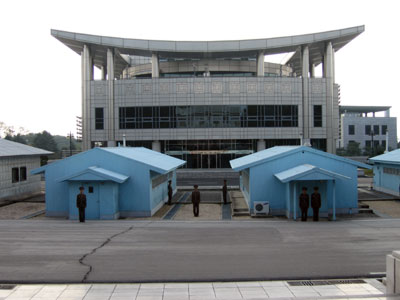 Elsewhere in the DMZ we’re walked through a series of climbing bunkers to a place where a rather jolly, gold-toothed officer from the DPRK army relates the story of one of the true oddities of this half-century stand-off, the Korean Wall. For northerners this is their version of the Berlin Wall, an eight-metre high concrete barrier segmenting and humiliating the nation, cleverly constructed to appear invisible to viewers from the South and devised as a springboard for attacks from the ROK. The southern version of events is that it’s a basic anti-tank barrier hindering invasion from the north, and although we’re given high-powered binoculars to focus across the rather hazy valley to where the wall sits, it’s difficult to confirm exactly what’s going on. It might as well be made of custard.

The officer takes us into a hall where we watch a film reinforcing the North Korean perspective, the two Kims gazing down on us as usual. When the video brakes down for the second time, the show is over. 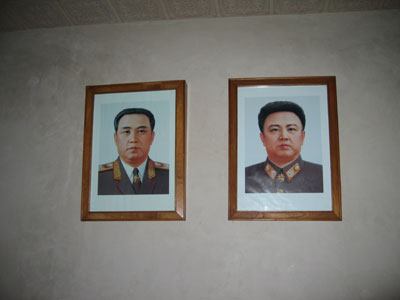 Evening beckons and it’s getting dark, so we drive back to Kaesong, where we check into the Folk Hotel, a genuinely beguiling, rather lovely place where our beds are rough mattresses lying directly on a heated, mat covered floor. 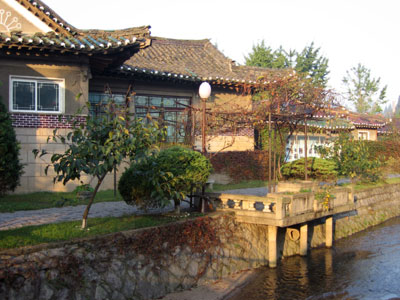 And so to dinner. It’s the usual fayre of kim’chi and cold egg, but there is one treat awaiting. Earlier, our guide Mr Lee had asked if anyone would be interested in sampling a bowl of the local delicacy, dog meat soup. He tells us how Koreans will eat this dish twice a year – once in winter to ward off the cold weather, and again in summer to protect from heat stroke. While half our party recoil at the very suggestion, the rest of us are keen to try this fabled broth and cough up the requisite €5.

The soup itself is a very spicy affair, and quite delicious, while the meat, hoisted from the hot liquid with chopsticks, is most reminiscent of lamb. At least it doesn’t taste like chicken. 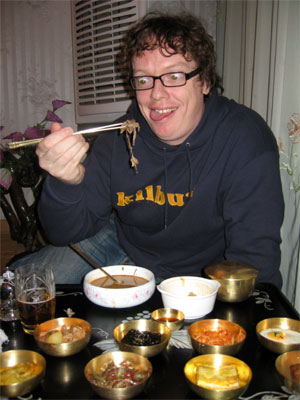 After dinner we settle down with a few bottles of (excellent) RyongSong beer, and get our first taste of karaoke, North Korean style. We’ve been trying to get our waitresses to show us how it’s done, but they seem a little shy, despite the obviously well-used karaoke machine in the corner of the room. A disc is inserted, the microphone plugged in, and after much whispering and tittering and several false starts, a number is finally selected by the younger of the two girls. She chooses a love song, and the results are staggering. Within 15 seconds every man watching is transfixed. By the end of the song we’re all completely besotted. There’s a brief moment’s silence before the applause rolls around the room, while she giggles and trots off to the kitchen. It’s a remarkable, surreal end to a quite amazing day. 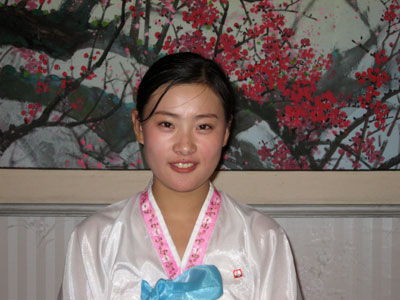