After an early morning breakfast we’re back on the road. It’s one of the most important dates in the North Korean calender, the 60th anniversary of the founding of the Worker’s Revolutionary Party, and all of Kaesong has turned out to pay their respects to yet another statue of Kim Il-sung. This monument towers above the town on the peak of Mt Janam, the Great Leader relaxed in all his bronze magnificence as the multitudes climb the hill to acclaim his Godliness. 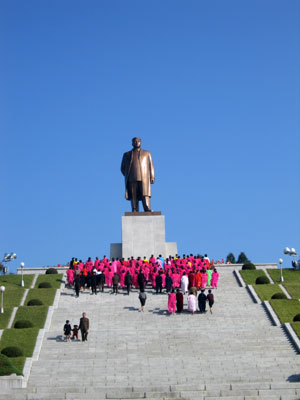 As you can see, there’s a lot of pink going on. This is the traditional national dress, called either the chima chogori or the hanbok or the chos’n-ot, depending on which version of the Internet you believe, and I’ve not been able to pinpoint what the colour signifies. Perhaps it’s a love of candy floss. Smaller numbers can be seen wearing fluorescent green, and there’s also a yellow and red version. Either way, these garments would be very handy for cycling in terms of visibility, although I imagine the lengthy hem arrangement might hinder peddling. 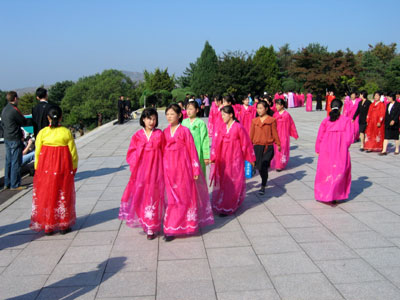 There’s more pink to be had at our next stop, the Koryo Museum, where the guide is adorned in a lighter shade and briskly shows us the exhibits before slowing down at the museum shop where we can spend hard currency. It’s a pattern which will become familiar at most of the places we stop – guided past the exhibits rather than being given time to examine them. The commentaries are similarly uniform – each presented in beautifully flawless yet monotone English, as if endless rehearsal has removed any spontaneity from of the delivery. 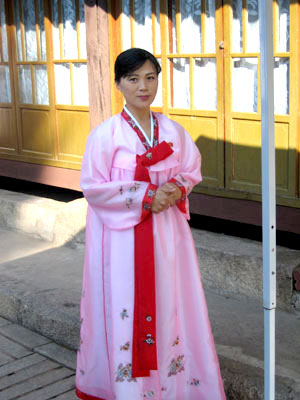 The guide at the Koryo Museum.
Mother of seven children.

Next it’s the Kongmin’s Tomb, a charming set of stone figures and burial mounds marking the final resting place of the 14th Century King of Koryo, his plot carefully guarded by some rather stern-looking stone sheep. 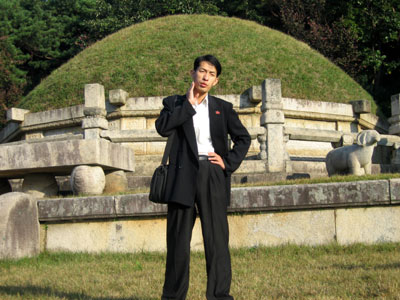 Then it’s up the highway to Pyongyang, stopping only for a photo opportunity at The Monument to the Three Charters for National Reunification. 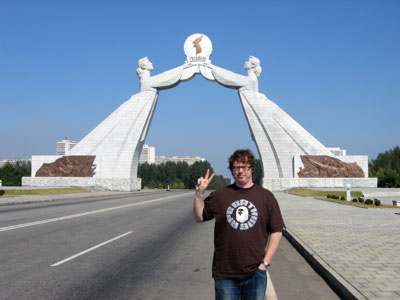 The Monument to the Three Charters for National Reunification.

Heading back into the city we stop briefly at Kim Il-sung’s birthplace, a spotlessly maintained pair of thatched huts showing the Eternal Leader’s humble origins. Once again we’re given the whistle-stop tour before being allowed to settle nearer the cash register. 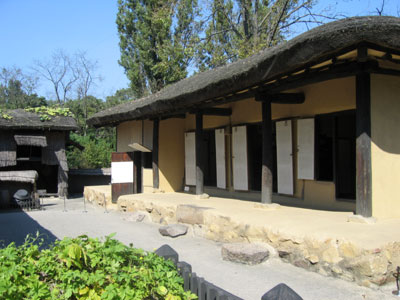 Arriving back in the city, we’re driven to Puhung subway station for what turns out to be one of the highlights of the trip. Descending an enormously long elevator (it transports passengers to a vertical depth of 100 metres and takes several minutes to do so), we’re confronted by an enormous cavern hewn out of the rock, cloaked in marble and adorned by a set of extraordinarily ornate chandeliers. On the vast platforms commuters huddle round display copies of the local newspaper, studiously noting the contents, while trains slide quietly in and out of the station. 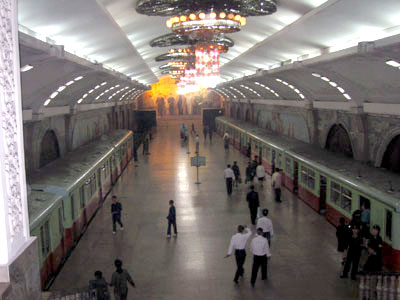 And then we get to ride the train. It’s curious, the only part of the entire tour that feels stage-managed. We’re ushered to one end of the platform, and very quickly a completely empty train pulls up. There’s a moment of confusion, some hand-signals, and the train reverses back into the tunnel. A minute later another arrives, packed with commuters apart from the carriage that arrives in front of us, one end of which is empty. We clamber on, and for a minute or so the middle section of the car plays host to a hilarious battle of international chivalry, North Korea versus the rest of the World. Armed with several languages and a some less-practiced hand gestures, we’re desperate to let the locals sit down, but they won’t have it, insisting that we do. It’s the World’s politest standoff. Eventually we’re all sharing the same space, everyone grinning maniacally and teaching each other to say “hello”. A single stop later (Yongwang station) and we depart amid much waving and more smiling. It’s a glorious, fleeting moment of genuine interaction right in the middle of what had felt like the one truly choreographed part of the trip.

Naturally enough, following this brief breakthrough in armistice negotiations, we’re immediately faced with souvenirs to buy – copies of the Pyongyang Metro Guidebook, a snip at €5 – before being ushered out of the station and into the daylight. 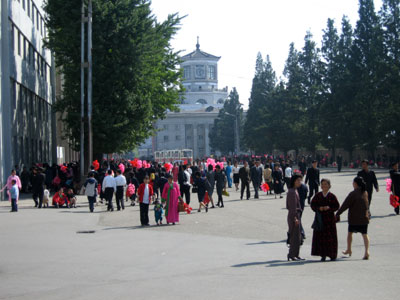 Lunch is memorable, not so much for the food, but for what follows. The waitresses line up to sing karaoke, starting with Ban Gap Seum Ni Da (Nice To Meet You), a sprightly number from the country’s leading exponent of modern popular music, the Pochonbo Electronic Ensemble. This song is everywhere we go, from the Arirang Games to TV broadcasts – I imagine it’s the local equivalent of “Wonderwall” or “Bohemian Rhapsody”. Another song follows, then a third girl gets up to sing. This tune has a more strident beat, and pretty soon all the Westerners in the room are clapping gleefully along. And then the visuals kick in on the big screen. It’s all missile launches, marching soldiers and mushroom clouds. Christ knows what she’s singing about, but it ain’t Scaramouche, Scaramouche will you do the Fandango. Immediately we’re all exchanging ‘WTF?’ looks and trying not to look like it’s the most surreal moment of our lives, but the atmosphere it the room has just been cranked up several notches. 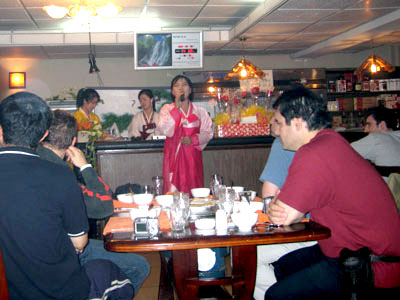 All eyes on the screen. We’ve stopped clapping.

Tumbling out of the restaurant and onto the bus, it seems that the day can’t possibly develop any further bizarre twists, but we’re wrong. We’re off to a flower exhibition. Normally this would be the signal for me to catch up on a book or, in the absence of reading material, hack off my arm with a blunt fork in a doomed attempt to excuse my presence, but we’re in North Korea, where flower shows are not like those at Kew Gardens. For a start, there are really only two kinds of flower on display.

The first is the Kimilsungia, and the second, for those with limited imagination, is indeed the Kimjongilia>. A red rose and a purple orchid. Millions of them, shaped into endless sculptures demonstrating the strength of the regime and the ideals that are its backbone. It’s extraordinary. 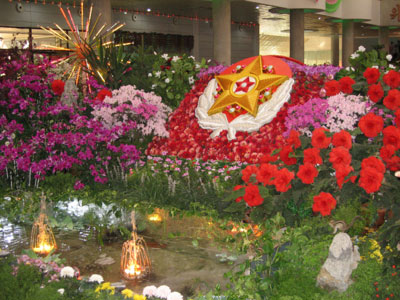 Say it with flowers.

Meanwhile, local families are queuing up to have their pictures taken in front of vast portraits of the two Kims, and those caught up in any kind of green-fingered fervour can purchase ancient looking secateurs with which, one presumes, to produce their own landscaped tributes. 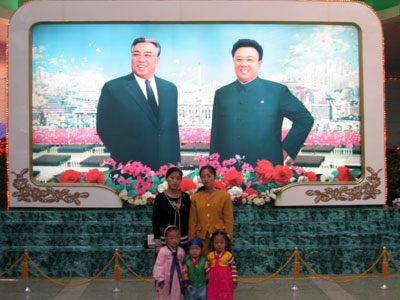 As tradition is this part of the World must surely dictate, there’s only one way to follow such an event, and that’s with a trip to the circus. Tightrope-walkers walk tightropes, jugglers juggle and acrobats perform acrobatics. It’s all highly impressive, and there’s not a dancing bear in sight. During one peculiar, pantomime-like sequence, an actor dressed as a drunk American GI staggers into the arena, a North Korean performer sneakily planting repeated kicks to his rear as laughter rains from the stalls. 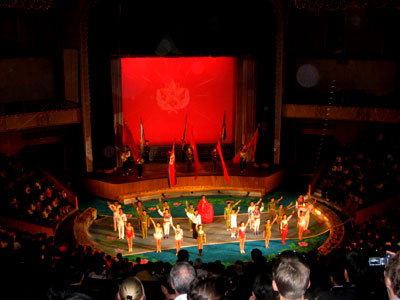 All the fun of the fair.

As soon as the show is over we’re hurried back onto the bus and ferried across town to the efficiently titled Monument to the Victorious Fatherland Liberation War 1950-1953, a vast stone square surrounded by ten bronze statues depicting various scenes from the Korean War. 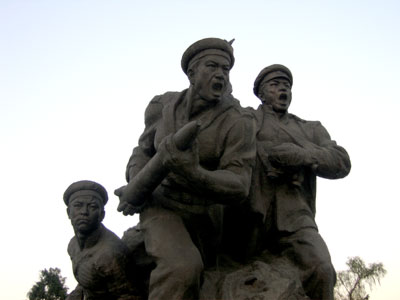 War is stupid. And people are stupid. etc.

From the memorial we’re also afforded a decent view of the 105-storey, 3000-room Ryugyong Hotel, the construction of which started in 1987 and halted five years later. The reason? Depends on who you listen to, but either local investment ran out, foreign investment was withdrawn, or the whole construction was built of such low-grade concrete that it couldn’t ever hope to be safely completed. In 2005 it’s derelict, ghostly and unfinished, topped by a rusting crane. 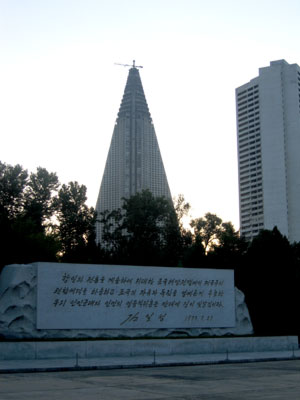 Room service may be some time.

After dropping our bags back at the Koryo Hotel we’re driven across the city once more, this time to sample Korean hot pot, a cook-your-own kind of affair featuring various scraps of meat, vegetables, noodles, egg and tofu. While we’re eating we’re able to watch the highlights of the day’s big parade in Kim Il-sung Square, the camera switching from time to time to shots of Kim Jong-il keeping a close eye on proceedings. 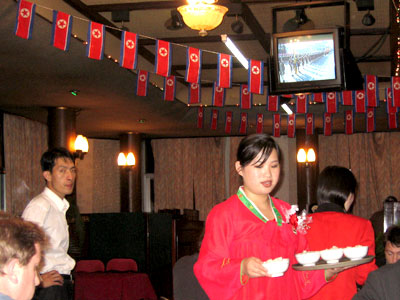 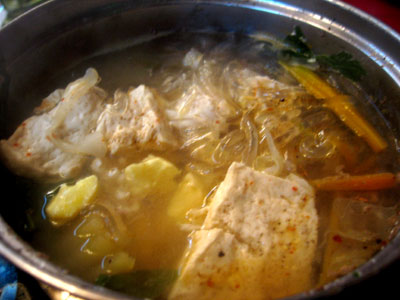 I made this. Sort of.

Before lights out we hit the bar at the hotel, where a fellow traveller is performing what we think is the first concert by an American in North Korea since the cessation of fighting in 1953. This may be historical, but the performance is a little on the meek side overall, although his bravery in picking through a slow version of ‘The Star Spangled Banner’ should probably be applauded. Hendrix at Woodstock it surely ain’t, but it’s briefly entertaining nonetheless, and once again events are listing towards the surreal. Most of the clientele are half-cut, dodgy South Korean businessmen busy hustling travel junkies out of a few bucks on the pool tables, and an order of drinks paid for in Euros prompts a fistful of change that includes American Dollars, Chinese Yuan and a small packet of melon-flavoured chewing gum.

By now, several drinks to the left of sober, this seems perfectly normal.