Why would I want to eat the stomach lining of a cow? Well, let’s see:

3. Because my old friend Hugh Fearnley Whittingstall says I should, revealing in his wondrous Bible of Meat™ that his own experiments with the dish have been “a resounding success” (page 199). And, as regular readers will know, when Hugh says ‘jump’, I generally grab my trusty chef’s blade and start chopping chunks of flesh. 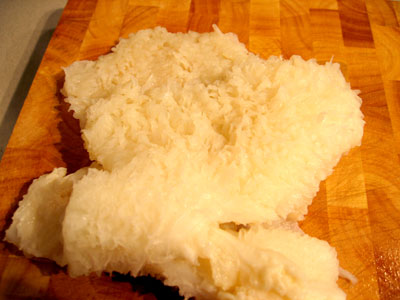 Tripe, in it’s naked form (above) is not an attractive prospect. It has the look and feel of a sodden bath mat, whilst it gives off the damp and musty odour of a basset hound that’s just just come in from the rain; one can understand why it doesn’t sit comfortably next to the racks of lamb and beef medallions at your local Waitrose.

Turning the thing into something resembling edible food is going to be a challenge, and I choose the classic Lancashire recipe – tripe and onions – because it seems such an arbitrary mix of ingredients: cooked in milk and flavoured with nutmeg. Why that combination? Why not marry the innards to carrot, boil them in gin and add a dusting of turmeric? Or mix with asparagus, roast in peanut sauce then lightly sprinkle with licorice shavings? I don’t know the answer, and I’m not going to argue with tradition. So we start by parboiling the tripe. 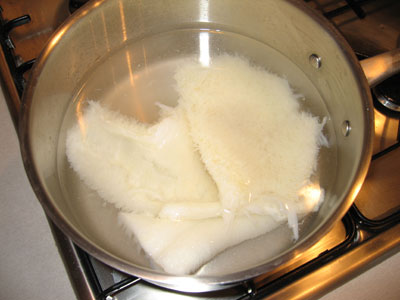 While the tripe is receiving its watery baptism I cut up a couple of white Italian onions, the theory being that this will preserve the pale nature of the dish – if you’re going to cook white stuff, I reason, then why not do it properly? 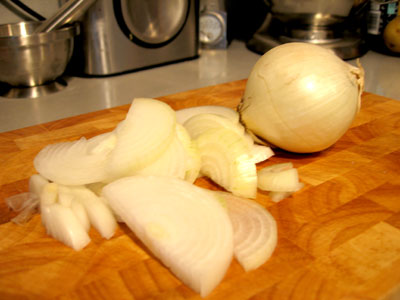 The tripe is removed from the water and cut into pieces, and then it’s back into the pan, where it nestles comfortably amongst the onions, doused in a pint of milk and seasoned with a healthy pinch of nutmeg and a bay leaf. 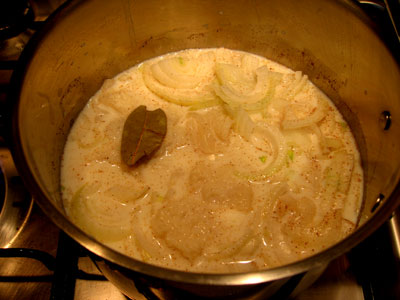 And next? We simmer the ingredients for a couple of hours. What you do during this time is up to you, but in case you\’re short of ideas, this is what I got up to: I took some rubbish down to the basement, put up a couple of Zero Gravity shelves in the bedroom, watered my collection of chives, read chapter six of The Last Amateurs: Playing for Glory and Honor in Division 1 Basketball by the great American sportswriter John Feinstein, and made some mashed potato. What a life, eh? 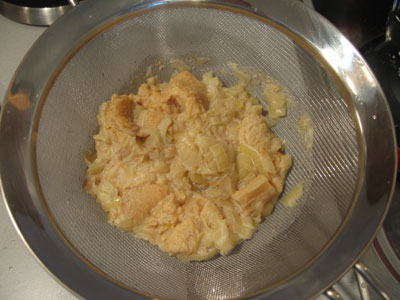 Then I strain the tripe, making sure to preserve the cooking liquid. Suddenly, it’s looking more like food although, to be fair, it’s not terribly attractive yet, taking on the appearance of a faded orange porridge. 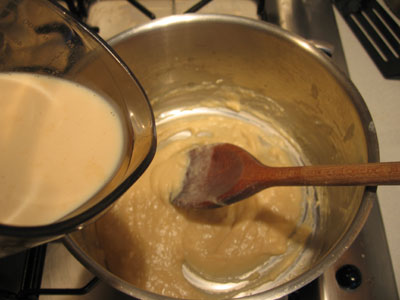 Meanwhile, back in the pan, I melt some butter, stir in a few tablespoons of flour and cook gently for a minute or so, stirring continuously. Then it’s off the heat, and in with the reserved cooking liquid, before returning to the stove and back to the boil, all the time stirring, until the sauce is nicely thickened. Finally, the tripe and onions go back in, and the whole shebang is reheated, plated next to the mash, and garnished with parsley. 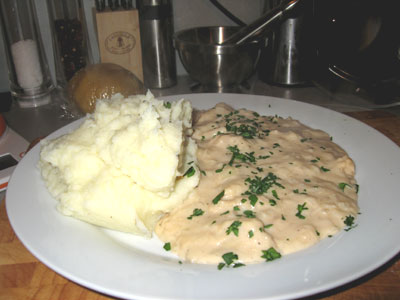 To be quite frank, it’s disgusting. It has the texture of mucus. Or glue. And it tastes like decomposing leek. I invite my neighbour to sample a mouthful, but he describes it as the worst thing he’s ever eaten. And strangely, I think this is how it’s meant to taste. The recipe is a ‘classic’, and I’m confident enough in my own abilities in the kitchen to know when I’ve screwed up a recipe – and I haven’t in this case.

I suspect that that tripe has dropped out of fashion for a a very good reason: that in reality, no-one likes the bloody stuff, not even your Gran. And while I’m all for the waste-nothing, nose-to-nail approach to meat eating, this is a step too far, like making a pie out of hair or some eyelid soup: just because you can doesn’t mean you should.

The mashed potato was really yummy, however.