It’s time. A week ago I collected my snails, and after five days of banqueting on the finest of Waitrose greens, plus an extra two on a starvation diet, my slimy pals are purged of all impurities and ready for the pot. 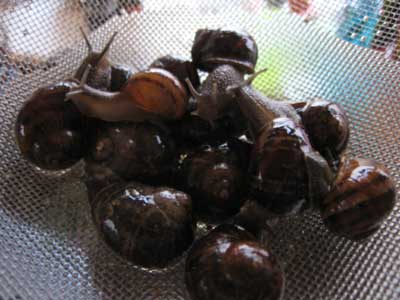 The slaughter is made more difficult than expected because over the last week I’ve grown attached to the little fellas, humanising them somewhat by giving them names. In the picture above, Valentino Rossi can be seen clambering over a couple of the less dominant members of the family (middle right), while Chandler is the alert looking creature (top left) about to give Princess B a ride. What Princess B doesn’t realise, of course, is that this ride will surely be her last. 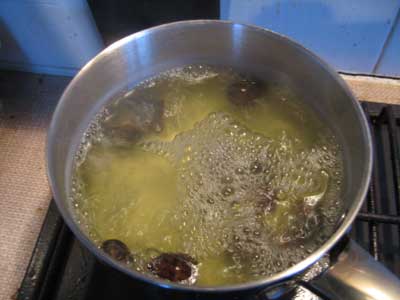 And into the pan they go. Reluctantly ignoring their silent snail screams, I boil them gently for ten minutes. Rather strangely, the water turns yellow, but I can’t find any reference to this on the Internet – I’m hoping it’s not some kind of toxic gastropod secretion, but only history will tell. Cooking time over, I’m able to extract the fleshy morsels from their homes using a corkscrew. 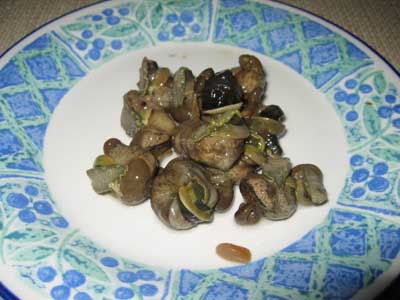 I’ll admit that at the moment they don’t look too appetising, especially the ones that seem to have some kind of vibrant green slime adorning their nicely plump exteriors. I can solve this, however, by sautéing them for a couple of minutes in butter and finely sliced garlic after a quick wash. In the picture below, this process is documented in the rear saucepan, while the foreground wok bears all the hallmarks of a wild mushroom risotto about 14 minutes into its alloted cooking time. 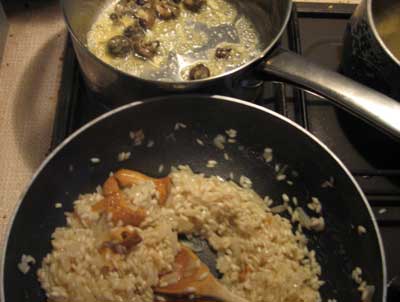 A few short minutes later, and everything is ready. I’ve added the snails and some Parmesan to the risotto, and we’re ready to eat. 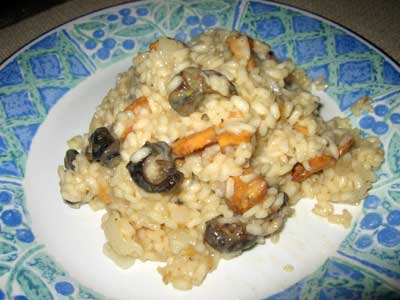 It’s not bad. The snails actually taste like the ones I’ve had in professional restaurants (i.e. like a slightly rubbery, garlicky version of yes, you guessed it, chicken), and they go well with the risotto. It’s a success.

Would I do it again? Well, there’s a lot of work involved. You need to stalk the snails under cover of darkness, keep them fed for the best part of a week (they got through nearly Â£2 worth of salad), clean death row regularly (you don’t want them to start snacking on their own poop if they get hungry), then lead them guiltily to the killing floor. This bit, although mildly traumatic, wasn’t nearly as hard as I expected, and I’m proud of the fact that I’ve hunted, slain and cooked my own dinner.

Next up, polar bear.