After several months of experimentation in the blogjam kitchen, it is with great pride that I’m able to announce the creation of the perfect chip. The number of variables isn’t high, but they can make a huge difference to the end result.

First up, the cut. This is, of course, a matter of personal preference, but I prefer the traditional French Fry cut, offering an approximate 7mm square cross-section. This gives the end result a perfect balance of crisp golden exterior and fluffy white interior. 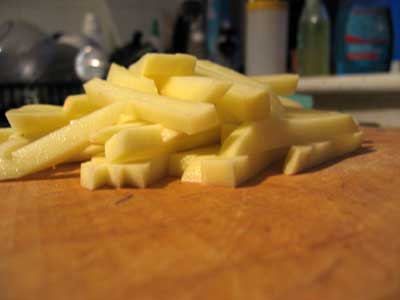 After cutting your chips, you should wash them to get rid of any excess starch. Dry them off carefully (I use a clean tea-towel) to lose as much surface moisture as you can. Then it’s into the oil. To obtain a nice crisp finish it’s important to initially fry the potato at a lower temperature, say 130° – use a thermometer – this allows any remaining starch in the surface cells to dissolve and form a glue with the outer cell walls, creating a thicker, crunchier coating. Five minutes at this temperature should be enough, or until you can squash one of the chips between your fingers but the surface hasn’t yet started to brown. 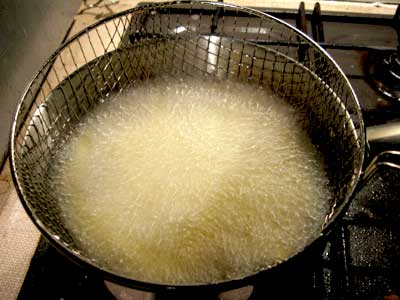 Next up, remove your frying basket from the heat and set aside. Continue heating the oil until it reaches a temperature of 180°, then return the chips to the pan. This quick, final burn will brown and crisp the exterior – it should only take two or three minutes.

Remove the chips from the pan one final time, shake loose any excess fat, then add salt, pepper and pie to taste. 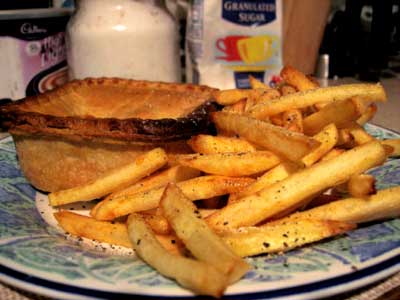 To change tack slightly: The pie above is merely one of Tescos’ finest, but award-winning blogger Scaryduck has much bigger concerns. Alarmed at the absence of Breville’s historic Pie Magic machine from Britain’s department stores and cookware shops, he’s set up a petition to campaign for its reintroduction.

After all, as one of the signatories states, “There is one thing better than food, and that is food in a pie.”