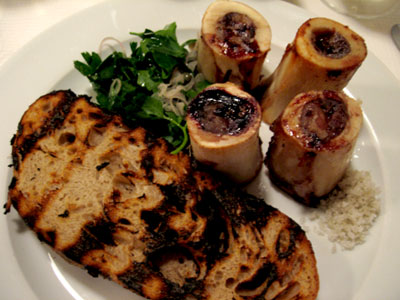 I ate at St John on Friday. The restaurant is most famous for its ‘nose-to-tail’ kitchen philosophy, where every part of the animal is saved, served and savoured; current residents of the menu include chitterlings (pig’s intestines) and roast bone marrow & parsley salad (pictured above). The latter is delicious, despite having the texture of cooked mucus, and involves scraping the inside of some roasted veal bones for its glutinous bounty, then spreading this jellied nectar onto slices of toast. This may sound unappetising, but I can guarantee that it’s genuinely mouthwatering, and that it won’t be long before I’m rustling up batches of the stuff in the blogjam kitchen.

Other dishes sampled included a piquant block of braised hare, a succulent hunk of middlewhite pork, a truly ambrosial marmalade ice-cream and a quite superior creme brulée.

I’d suggest that everyone book a table forthwith or, failing that, rush out and buy a copy of the restaurant’s own cookbook, and reproduce the dishes at home. While some of the recipes might fall foul of post-BSE government meddling (sheep brains are getting harder and harder to come by), others to attempt include crispy pig’s tails, duck’s hearts on toast and pea & pig’s ear soup.

← letter not from middlesbrough
ouch →