Without wishing to resort to racial stereotyping, the Asians really do appear to eat absolutely anything. Oxfam run a programme in India that pays locals to capture rats that are then sold for food. In Vietnam, delicious baby mice are served up on a bed of ginger, garlic, coriander and rice. The Burmese are fond of settling down with a nice plateful of grilled bat, while birds’ nest soup (actually made from saliva) is an expensive delicacy in much of South-East Asia. Give a Filipino balut (the partially formed foetus of a baby bird, served warm from the shell), and you’ll have a friend for life, whilst north of Phnom Penh there’s no finer Cambodian hospitality than that which is accompanied by deep-fried tarantula.

China, of course, excels at this sort of thing – visit the night market a couple of blocks east of the Forbidden City and you’ll be confronted with stall after stall selling scorpion and sea horse, while Beijing also plays host to an internationally renowned penis restuarant: last time I was in town I tried to drum up support for a trip to sample its glandular gastronomy, but nobody took the bait, and I don’t think it’s the kind of place you want to be seen visiting unaccompanied.

The tail-end of the same trip found me in Seoul, where I followed esteemed food-blogger Noodlepie’s advice and visited Noryangjin Fish Market in search of freaky food. It’s an extraordinary place, 6000 square metres of space containing 700 shops stacked high with all the creatures of the sea – every possible variety of fish, crabs, octopus, squid, prawns, abalone, clams, oysters, giant pink sea slugs… the shopping list is endless. The market seems to contain enough food to feed the World’s hungry, but Seoul chomps its way through through this mountain of sea-meat each and every day. It’s genuinely staggering. 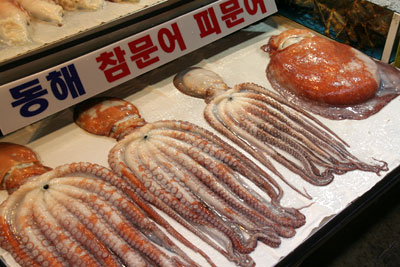 While I’d like to try a slice of raw monggae (a mottled red sack of soft flesh covered in acne-like spots, and apparently delicious), it’s only 6.30 in the morning and the first floor restaurants aren’t yet open. I wander the streets for a while in search of food, finally grabbing some snacks from a 7/11, and it’s here that I strike the mother-load. 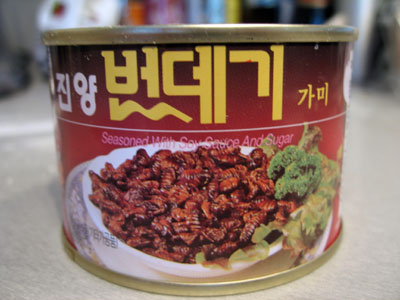 At first glance it looks like an ordinary tin, but turn it round so the English translation is visible, and voila! Salvation in a tin. 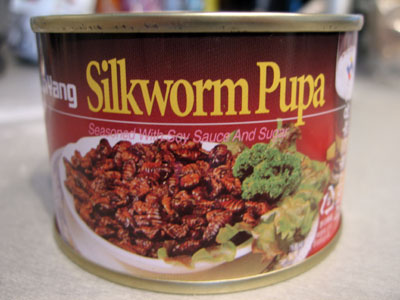 Yep, it’s silkworm pupa. Seasoned with soy sauce and sugar. Sounds like some kind of heavenly nectar, right? I’m determined to find out, so I stow the wormy wonder in my hand luggage and return forthwith to the UK, where I open the tin. 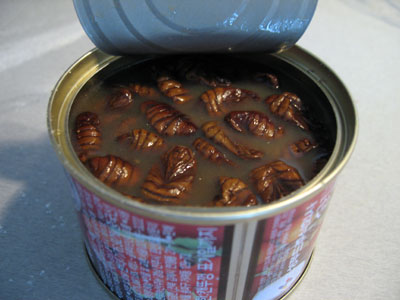 It doesn’t look good. If anything, the pupa resemble miniature cockroaches that have had their legs and antennae removed, as if to streamline their appearance.

Raw, it doesn’t taste great. Not that I’m an expert on bug eating or anything, but it kind of tastes like you’d expect it to; a bit dusty, a bit husky, with bits that get stuck between your teeth and probably don’t digest too well. Your Koi carp might disagree, but I think it needs cooking.

Pizza is the answer. I rustle up a batch of dough, add a layer of tomato paste, sprinkle some grated mozzarella over the top, then carefully arrange some asparagus spears clock-style over the base. (Note: this artistic flourish gives the casual viewer the impression that I’ve laboured many hours over the recipe, and that my cooking skills have advanced to a point where the fine art of final presentation has become as important as flavour. This couldn’t be further from the truth, of course: all this arseing around merely disguises the fact that I’ve made no effort at all). Finally, the pupa are laid out in their cheesy graveyard. 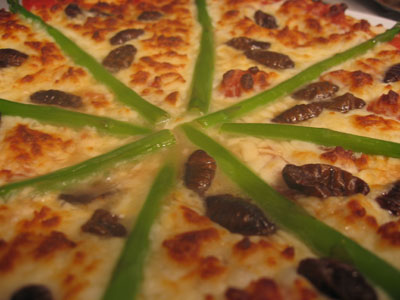 Visually speaking, it’s an obvious triumph. The asparagus wheel draws the attention, while the silkworm pupa nestle cozily in the melted cheese, wilted and glistening. Breathlessly I steer a pizza cutter through my doughy prize, carving out a generous slice of Korean-Italian ecstasy.

It isn’t very nice. In fact, it’s quite nasty. So I throw away the pizza and eat some toast. With jam on it. Nice jam.